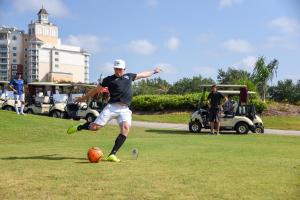 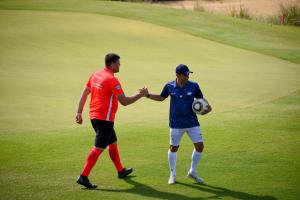 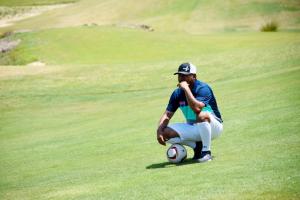 The passion, competitiveness, and immense desire to be recognized as champions by their peers have inspired the players to do everything humanly possible to get to that final hole with a chance to win”
— AFGL President and CEO Laura Balestrini

KISSIMMEE, FLORIDA, USA, June 2, 2021 /EINPresswire.com/ — If history is any indication, the U.S. FootGolf Open, being played June 4-6 at the Reunion Resort and Golf Club in Kissimmee, Fla., is likely to go down to the final kicks.

Sharif Khatib of Los Angeles seeks to defend his 2019 championship (Covid-19 prevented the event from being played last year) in an international field that will include 2018 champion Ben Clarke of Berhamsted, UK and Matias Perrone of Argentina, the reigning FIFG FootGolf World champion who captured the inaugural U.S. FootGolf Open in 2014.

In 2019, Khatib needed every one of his five birdies at Reunion to post a final round 67 and earn a one-shot victory over Clarke and Switzerland’s Lionel Jacot. The latter made a legendary charge with birdies on the final four holes (six on his final nine) for an eight-under-par 64 on the final day. Clarke, the top-ranked FIFG player five years running, held off Nicolas Garcia and Julian Nash to win the 2018 U.S. FootGolf Open in Oxnard, Cal. and needed a shootout victory to secure second place against Jacot in 2019.

This week’s tournament marks the fourth time the U.S. FootGolf Open will be played at Reunion but the first time on the newly-upgraded par-72 Jack Nicklaus course. The U.S. and Mexico opens feature a combined $20,000 in prize money and U.S. Open competitors in the Men’s Division are also vying for two guaranteed spots in the FootGolf World Cup.

FootGolf came to the U.S. in 2011, but it was the creation of the U.S. Pro-Am Tour — and with it the U.S. FootGolf Open in 2014 — that spurred interest in the U.S. on an international level and helped advance the performance of U.S. competitors.

“The 2014 U.S. Open, part of the U.S.Pro-Am Tour with its cash purse of $25,000, was the first FootGolf competition in the U.S. to give players the feeling of becoming ‘professionals’ in the sport they love” said Laura Balestrini, co-founder, President and CEO of the American FootGolf League.

Another turning point came in 2016 when the AFGL, the governing body of the Major League sport of FootGolf in the U.S., created its AFGL Tour. That same year, Women’s and Senior Division champions were crowned at the U.S. FootGolf Open.

“The U.S. Open has become very important to our FootGolf world,” Balestrini said. “In 2019 we hosted players from 20 countries and across the U.S. The passion, competitiveness, and immense desire to be recognized as champions by their peers have inspired the players to do everything humanly possible to get to that final hole with a chance to win one of the most prestigious competitions in this young sport.”

Khatib’s 2019 triumph was the first by an American under the AFGL Tour format. Players bound to challenge him this week include Alex Hood of Boynton Beach, Fla., the current American FootGolf League points leader (who won the first two tournaments of the season on Florida courses in Largo and Port New Richey), and Bart Wojtyla of North Hollywood, Cal. who is second in the AFGL standings. Wojtyla birdied the final three holes of regulation, then defeated Jorge Uricona of Annandale, Va. to win the May 15-16 Tennessee 250 in Memphis. Angel Reyes of Glendale, Cal. enters the U.S. FootGolf Open with nine top-three finishes (two wins) in his 12 career AFGL starts.

On the women’s side, Jo Reid of Anchorage, Alaska, the 2017 U.S. FootGolf Open winner and two-time U.S. National champion, will lead the field at Reunion. Oklahoma City’s Laura Parker, no worse than second in any of her AFGL starts the last two years and fresh off her victory at Memphis, figures to provide the strongest challenge.

The American FootGolf League (AFGL) and USA FootGolf made its debut in 2011 and is played on hundreds of golf courses in all 50 states, The District of Columbia, Puerto Rico, U.S. Caribbean and Guam. The sport is regulated by the American FootGolf Federation, the exclusive member in the U.S. under the world’s governing body, the Federation for International FootGolf (FIFG). With an estimate of 20,000 tee times a month for recreational play. Approximately 200 players a year advance to the AFGL Tour, the major league of FootGolf in the United States. In 2021, founders Roberto and Laura Balestrini will introduce the much anticipated U.S. Amateur FootGolf Tour.