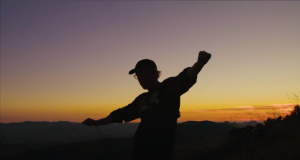 LOS ANGELES, CALIFORNIA, UNITED STATES, June 4, 2021 /EINPresswire.com/ — Los Angeles-based musician Wingman is the type of person who can take something unexpected and tumultuous, and effortlessly transform it into captivating art. Need proof? Look no further than his new single and subsequent music video for “Crash Land”.

“Crash Land” was an unplanned surprise for everyone, including Wingman. The ambitious rapper/electronic artist had to make a startling emergency landing in his signature helicopter; ultimately ending up in the mountains of California’s central coast and approx. 20 miles removed from the nearest town. Wingman and his cameraman, Matt Trainor, hiked for hours until they found cell service to call a rescue team.

Wingman and Matt were filming for another music video when a downdraft of air forced them to make an emergency landing. The good news, however, is that the duo was able to capture before and after footage, which beautifully contrasts and vividly tells the story of their journey. What started as a harrowing experience would quickly lend itself to the creativity and jovial sensibilities that propel Wingman to greater heights.

Wingman’s popularity is rising higher than ever, in no small part due to the strength of tracks like “F Up My Life”, “Beijing”, and the title track of his new album, “Weird New Feelings”. The high-flying performer has amassed over 5 million streams and counting.

As a kid, Wingman made beats growing up and pursued his passions of music with being inspired by artists like Flume and Kasbo. This took his songs to another level and experimented with rapping over electronic drops. Wingman’s newest released Single “Weird New Feelings” is just the start of many upcoming fresh projects. He looks forward to continuing to share more of his story with listeners through his unique sound and storytelling.