Drug-Free World volunteers from the Church of Scientology of Cagliari in the south of Sardinia spend a Saturday evening talking to young people and helping them make the self-determined decision not to use drugs. 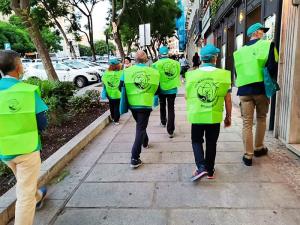 Knowledge is power and there is a wealth of factual information in the Truth About Drugs booklets. Each copy has the potential of saving lives. 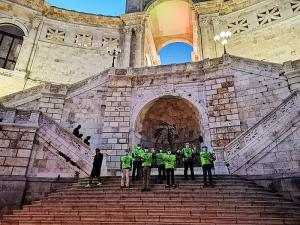 Volunteers from the Church of Scientology Cagliari meet at the famous Bastione Saint Remy and take off to engage youth in conversation to help them decide to live drug-free.

Overdose deaths and increased use of heroin, cocaine and synthetic drugs in Italy drive Churches of Scientology of Sardinia volunteers to reach out to youth.

LOS ANGELES, CALIFORNIA, UNITED STATES, February 20, 2021 /EINPresswire.com/ — At loose ends? Anxious? Trapped at home with an abusive parent or partner? Just bored? Since the pandemic began, for whatever reason, Italians have turned to heroin, cocaine and synthetic drugs in increasing numbers, and the overdose deaths in Italy have surged.

Aware that social media and word of mouth spread false claims making these drugs appear “safe” and inviting, volunteers from the Churches of Scientology of Sardinia launched a campaign to get the truth about drugs to the youth of their cities using booklets from Foundation for a Drug-Free World.

Wearing the distinctive Drug-Free World T-shirts, caps and jackets, volunteers pick out busy places where they can engage youth in conversation on this vital subject.

They ask them pointed questions: What drugs are they considering taking or already using? Do they know the short- or long-term effects of these substances? What have they heard about these drugs and where did they hear it?

Once they have their attention, they hand them a booklet that presents the unvarnished truth about that drug. They are driven by the knowledge that each of these booklets can save lives.

Free Truth About Drugs E-courses are now available in 20 languages through the Drug-Free World website at drugfreeworld.org.

*The reason people take drugs in the first place
*Essential facts about the most commonly used drugs
*The impact of these drugs on the lives of young people, presented by former users who speak from experience.

Foundation for a Drug-Free World is a volunteer-based organization. There are hundreds of groups internationally with many of them hosted by Churches of Scientology. The Church is its main sponsor, enabling the Foundation to provide this secular program and its materials free of charge to young people, parents, community leaders and drug educators worldwide.

According to the United Nations Office on Drugs and Crime: “For every dollar spent on prevention, at least ten can be saved in future health, social and crime costs.”