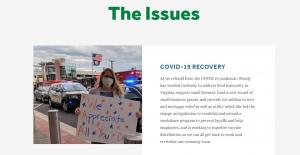 Gooditis mimicked her opponent’s platform and changed her primary issue to COVID-19 in May of 2021 after ignoring it during the entire pandemic on her website.

Imitation is the best form of flattery, and it is clear that the only thing his opponent has to offer after four years of minimal accomplishments is to imitate Nick’s fresh ideas for a better future.”
— Colin Sudduth

LEESBURG, VA, USA, June 4, 2021 /EINPresswire.com/ — Delegate Wendy Gooditis recently revamped her campaign website with her new platform for reelection. The campaign of her opponent, Nick Clemente – a former Leesburg Planning Commissioner, has called foul as they pointed out that many of the headers used are nearly verbatim of the campaign priorities for Clemente.

Clemente’s campaign provided multiple screenshots of Gooditis’s website from a period over the past year and compared them to today. A month ago her main issues were typical talking points for any candidate pre-COVID. Today, she has many new focus areas that screenshots show were initially absent such as COVID Recovery, Public Safety, and Mental Health. The Clemente campaign states that the problem is that these didn’t exist on her Issues page until Clemente launched his website.

Aaron Evans, a spokesman for the Clemente campaign stated: “Gooditis has literally had two terms to focus on all of these issues and they were never important enough to her to even find a corner on her website. Now that a vibrant opponent is discussing issues that matter to voters, she plays catchup and updates her website with what Clemente is already championing. Gooditis is clearly out of touch and scrambling to catch up. It is time for a fresh, available, and responsive Delegate to represent VA-10 and that is Nick Clemente.”

Nick Clemente’s campaign manager, Colin Sudduth added: “It is clear that Nick Clemente is already leading the dialogue for the future of Loudoun, Clarke, and Frederick Counties. Imitation is the best form of flattery, and it is clear that the only thing his opponent has to offer after four years of minimal accomplishments is to imitate Nick’s fresh ideas for a better future. If she had accomplished 1/10th of the things she is now imitating from Nick’s platform, Nick wouldn’t be running for Delegate. Nick will be the fresh, bold approach we need to deliver on promises for our future – not imitate them from competitors.”