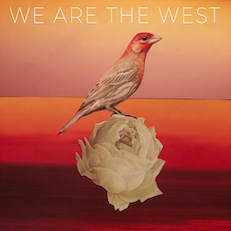 LOS ANGELES, CA, UNITED STATES, September 15, 2021 /EINPresswire.com/ — We Are The West has been achieving one success after another. After a series of 4 site-specific EPs, performing with David Bowie’s band in his ‘Celebrating David Bowie’ world tour, releasing their soulful and intricately crafted debut LP The Golden Shore, and providing the soundtrack for 2 Hearts (#1 movie on Netflix, June 2021), they’ve emerged from the pandemic into the warm sunlight with a brisk and immediate collection, ‘Only One Us‘, their finest work yet. Only One Us has been receiving grand praise from critics and is sure to become a classic album. The record has been getting airplay on premier radio stations, KCSN in LA and WFUV in NYC.

List of critically acclaimed reviews about Only One Us:

“Beautiful, cinematic folk. Their live show is just a feast for the eyes and the ears.” – NPR’s Here & Now

“Beyond its well-crafted songs, the album’s calling card is its great big heart. By the end, you might want to shout ‘Hey God, I’m Alive!’, too.” – Buzz Bands LA

“We Are The West are the best of acoustic music that dabbles in ambient Psych-Folk.” – The Alternate Root

“One of the most creative bands out there is out now with a beautiful new album. It will hypnotize you.” – Vents Magazine

We Are The West began way out east in a shipping container on a sheep farm in Holland. Then, inside a haunted convent in Brooklyn, before growing underground in a parking garage in Santa Monica where founders Brett Hool (voice, guitar) and John Kibler (upright bass, voice) host their renowned monthly concert series (“Feels like the wave of the future.” Los Angeles Magazine).

“This record came together very naturally and was delayed very unnaturally,” states founder Brett Hool. “Back when COVID was just a beachy brew, we gathered the new songs we’d been working on in our underground parking garage shows and headed downtown to Whispering Pines. Our main bubs Lord Huron kindly let us in, Ben Tolliday (Lord Huron, Hozier, Rick Rubin’s Broken Record) set up his magical microphonic machines, and we set about recording them live. Deep into overdub land, we hit the road in the new year, touring up the coast until I took a step to nowhere and broke my leg after a gig. The break hit the brakes on everything for a few weeks right until the whole world hit the brakes with COVID, and everyone knows the story since. With a fresh titanium tibia in the band and no gigs on the horizon, we started a radio show The Golden Hour on Malibu’s homegrown KBUU. During lockdown we magically met Kyle Mullarky (Babe Rainbow, Little Wings, Allah-Las) who invited us to his ranch to mix the songs, then turned us onto John Golden who mastered it. Our first gigs in a year and a half have been all acoustic affairs at the family farm in Malibu and new tunes are already growing alongside the crops.”

The album songs as follows:

Coping with Crises Through Mindfulness