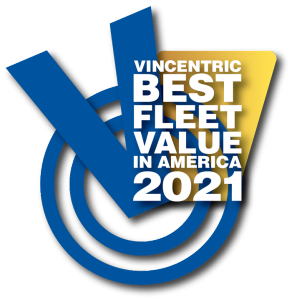 BINGHAM FARMS, MICHIGAN, UNITED STATES, April 6, 2021 /EINPresswire.com/ — The 16th annual Vincentric Best Fleet Value in America™ Awards were announced today with Toyota and Chevrolet earning six awards each, more than any other brands. Audi was close behind with four segment winners, while Mercedes-Benz, Kia, and Subaru all finished with three awards.

Toyota demonstrated its strength across the Passenger Car and SUV & Crossover categories: the Prius and Prius Prime both returned for repeat wins, along with first-time wins for the RAV4 Hybrid and RAV4 Prime. Earning the unofficial “Least Surprising Winner” award was the Toyota Tacoma, which returned to the winner’s circle for an outstanding fifteenth victory in the Small/Mid-Size Pickup segment. Toyota’s other winning model was the Avalon.

Chevrolet had best-in-class performances by both the Express cargo and passenger vans. The Express G2500 and Express G3500 outperformed the competition in four out of the total nine segments in the Vans category. Rounding out Chevrolet’s winners was the Spark LS, and the Silverado 1500 with its sixth overall win for Full-Size 1/2-Ton Pickup.

On the luxury side, Audi took home three out of four segment awards in the Luxury SUV & Crossover category, thanks to strong performances by the Q3, Q7, and Q5 Plug-In Hybrid. Mercedes-Benz’s winners were led by the Mercedes-Benz/Freightliner Sprinter 1500 passenger and cargo vans, which both returned for their second consecutive win.

Other noteworthy winners include the Nissan NV200 S, which earned its eighth consecutive win; the Ford F-350 XL, which earned a win for the fourth time; the BMW i3 Base, which claimed victory for Luxury Electric/Plug-In Hybrid for the sixth year in a row; the Kia Forte, which won for the third consecutive year; and the Subaru Crosstrek, which claimed an award for the fifth time.

Other brands with award winners were Dodge, Hyundai, Lincoln, Ram, and Volvo.

“Understanding and managing fleet costs have always been important for fleet owners and operators, and it has only become more crucial due to the economic impact of COVID-19,” said David Wurster, Vincentric President. “Making informed decisions is a key part of cost management. The Vincentric Best Fleet Value in America Awards help fleet professionals identify vehicles that deliver the lowest lifecycle costs and therefore bring proven value into their fleets.”

To determine the 2021 Vincentric Best Fleet Value in America™ Awards, Vincentric performed a cost of ownership analysis measuring over 2,000 vehicle configurations based on typical fleet use. Using eight different cost factors – depreciation, fees & taxes, financing, fuel, insurance, maintenance, opportunity cost, and repairs – each vehicle was evaluated in all 50 states plus D.C. using 28 different lifecycle scenarios. Winners were identified by determining which vehicles had the lowest fleet lifecycle cost in the most scenarios within its segment.

Further information regarding the winners of the 2021 Vincentric Best Fleet Value in America Awards™ and the Vincentric methodology is available at www.vincentric.com.

Vincentric provides data, knowledge, and insight to the automotive industry by identifying and applying the many aspects of automotive value. Vincentric data is used by organizations including Mercedes-Benz, Toyota, JD Power, Automotive Fleet Magazine, AAA, Nissan, and many others as a means of providing automotive insight to their clientele. Vincentric, LLC is a privately held automotive data compilation and analysis firm headquartered in Bingham Farms, Michigan.