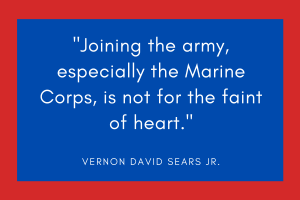 SAN ANTONIO, TEXAS, UNITED STATES, December 21, 2020 /EINPresswire.com/ — As a fervent advocate of the United States Marine, Vernon David Sears Jr. is enthusiastic about the launch of his new website, which will provide useful information for individuals looking to join what is considered the “toughest branch” of the US military. His website will highlight what it takes to be a marine from basic training to deployment and provide invaluable advice drawing from his firsthand experiences.

With a strong sense of patriotism and desire to serve his country, Vernon was well suited for his position in the Marine Corps. Today, he hopes to inspire others towards a similar path of purpose, honour, and comradeship.

“Joining the army, especially the Marine Corps, is not for the faint of heart. The US Marines demand only the highest standards of moral focus, physical strength, and mental toughness,” explains Vernon.

His website will emphasize the general requirements and qualifications necessitated by the branch, as well as what individuals can expect once they’ve completed their arduous training.

While there are many benefits to becoming a Marine, the most rewarding aspect for Vernon was the opportunity to be part of a unified brotherhood connected by a common noble cause.

“A shared sense of purpose, hard work, and relentless dedication created an unbreakable bond between myself and the other members of the force,” says Vernon.

With several years of experience under his belt, Vernon is eager to share the realities of serving in the Marine Corps, including the many rewards and challenges that come with fighting for one’s nation.

Those interested in learning more about the Marine Corps can do so via Vernon David Sears Jr.’s official website linked here.

Vernon David Sears Jr. is a Former Corporal of the United States Marine Corps honourably discharged in 1997. He believes his career in the Corps has instilled in him essential values that have helped shape him into this best self. Respect, selflessness, and integrity are just a few of the values Vernon has learned to live up to as a result of his military career. Accordingly, he continues to be a proud supporter of the work carried out by the Marines and hopes his website will help others understand the importance of this particular branch.