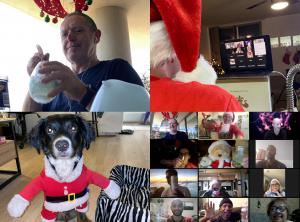 Bridging round and Wefunder campaign raise over 400K in six weeks

LOS ANGELES, CA, UNITED STATES, December 17, 2020 /EINPresswire.com/ — In just six weeks, the social-professional music collaboration app Vampr has raised over $400,000 in their latest bridging round and crowdfunding campaign. Over $100,000 flowed into the Wefunder campaign last week, placing Vampr into the top five campaigns currently active in North America and well on their way to their goal of $577,000. The campaign is currently outpacing their previous, which raised $1 million over six months.

Only 24 hours after the launch of their equity crowdfunding campaign, Vampr raised over $131,000. The campaign launched with backing from the Angel & Entrepreneurs Network (A&E), founded by New York Times best-selling author Neil Patel, and with investment from A&E’s David Weisburd, co-head of Venture Capital at 10X Capital. The $577,000 round was led by Kentucky venture firm RZN8 Capital.

“Seeing so many of our users invest in a platform that they really believe in justifies the literal marathon of running a successful crowdfunding campaign,” exclaims Vampr co-founder Josh Simons.

Simons and his co-founder, Baz Palmer, celebrated their growth with investors around the world with a virtual holiday drinks happy hour earlier this month.

With a current pre-money valuation of $9.6 million, Vampr is the number one most active and engaged social-professional network for musicians in every country thanks to an easy to use platform which has solved the problem of “who you know and where you live.” Vampr projects continued growth to cement itself as the top essential networking platform for creatives, already dubbed by Forbes as the “LinkedIn for all creatives.”

Vampr has previously raised $1.8 million from music industry executives, VC, angel investors, and crowdfunding efforts. Since their last crowdfunding campaign in 2019, Vampr went through a swift seven-month rebuild, to become a 360-degree one-stop-shop for artists, with the addition of Vampr Pro with Distribution and Vampr Publishing, representing over 5,000 songs for sync opportunities. Vampr has brokered over 6 million professional connections (up from 5 million in February 2020) in 190+ countries.

About Vampr:
Launched in 2016, Vampr is a location-based social and professional mobile platform that facilitates music discovery, networking, and communication between musicians, music industry professionals, and music fans. Founded by Australia’s The Music Network’s 30 Under 30 Power Player, Josh Simons, and multi-award-winning songwriter/guitarist and tech entrepreneur, Baz Palmer, the award-winning app is home to over 700,000 users and is active in every country. Vampr has helped fledgling musicians broker over 6 million connections worldwide. With the launch of Vampr Publishing and Vampr Pro earlier this year, the company now represents over 5,000 songs for sync opportunities and provides artists with all their essential services, normally fragmented across multiple providers. Vampr has been recognized in over 10 awards from various industry leaders including being named in Apple’s Best of Year and winning the SF MusicTech Summit. Last month they were named as finalists in the App Growth Awards and TMN music industry awards.