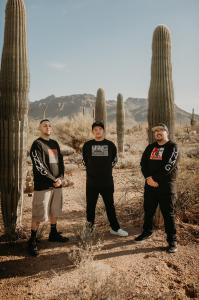 Unrehearsed Music Group, tackling all the heavy topics, With there lastest Song Visionary,

TUSCON, ARIZONA, UNITED STATES, April 6, 2021 /EINPresswire.com/ — The band Unrehearsed Music Group has a unique name and an even unique purpose. Consisting band members, D-$moke, OddBall aka Yung OB, and 3DWon, the band is proud to present its latest album, ‘Split,’ was released on March 12th this year. It was mixed and mastered by Mario Bolanos at Zona Zero Recording Studio In Tucson, Arizona.

The band has received a lot of praises and appreciation for their music. Their music particularly stands out due to the cacophony of sounds and their seamless integration within the track. The artists attempt to set their music apart lyrically, as well. Believing there is already too much in hip-hop mainstream music, this band tackles topics from all walks of life that are not usually brought to the forefront. These range from raw gangster material and politics to emotions experienced in real life. The goal is to create art through which the band can relate and connect with their listeners.

Although seemingly rough in musical content, the band has an exceptionally sentimental philosophy – they want to create a flame through their art that spreads like wildfire and brings change. They hope that their music will inspire their generation and the younger ones to be the change bearers. Because according to them, if not us, then who?

The group also has an inspirational story behind its formations. Unrehearsed Music Group was created to inspire change and be creative as they did so. D-Smoke and 3DWon created the group to form an independent record label, while OddBall aka Yung OB, is the graphic designer, and Artist. The trio has ties with the streets and has faced hardships and dangers of being out there alone. They left that life to pursue their musical career and now have an everyday life involving family, bills, and other mundane problems.

Their musical inspirations include 2Pac, N.W.A, Eminem, SPM, and more. However, their main inspirations are their kids and family. The band of three displays a lot of versatility and brings their unique method to the rap game for outstanding results.

Unrehearsed Music Group is grateful to all their fans for their love and support and wishes to dedicate their new album to those who have lost their lives in the pandemic. They are fond of engaging with fans via social media. To stream their music, please click here.

Unrehearsed Music Group consists of members D-Smoke or Daniel Grijalva, 3DWon or Eduardo Zuniga, and OddBall aka Yung OB or Luis Vasquez. Their main goal is to inspire change and build a legacy for their kids. The band would like to thank everyone who listens to our music and who keeps them going.