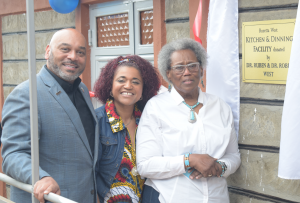 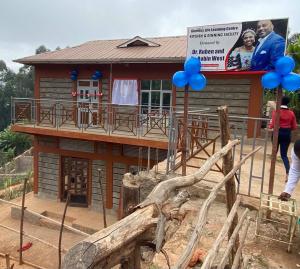 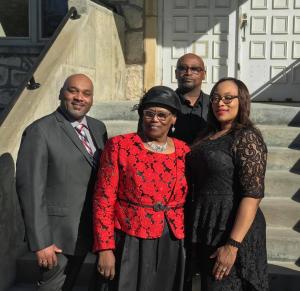 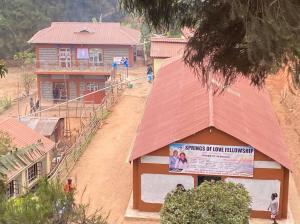 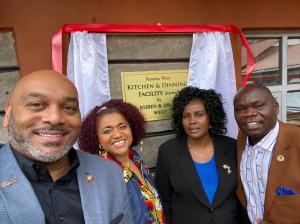 GOD has a way of giving back to you allowing you to realize that you are worth something. I cannot beat God’s giving.”
— Pastor Rosetta West

NAIROBI CITY, KENYA, September 15, 2021 /EINPresswire.com/ — On a recent trip to Nairobi, Kenya, Rosetta West, Associate Pastor at El Shaddai Ministries in Topeka, Kansas received the shock of her life when she discovered that a new kitchen and dining facility at the Glorious Life Learning Center in the Nunguni, Kilungu Region in Makueni County, Kenya was built and named after her. Dr. Dorcas Kavod, founded Glorious Life Learning Center to provide a better option for the families with young school age children. The donation of the kitchen and dining facility furthers this mission to provide the local children with a nutritious meal.

Many houses in the rural communities can barely shelter families from natural calamities such as floods, heavy rains, mud slides and other related weather conditions. Cooking is often done outside the houses in open spaces. Open kitchens are common in most homes and schools in these villages. The fireplace is normally a set of three stones put in a triangular form to support the cooking pot. These open kitchens lack refrigerators. Hence any surplus food spoils.

Unfortunately, there are families that live from hand to mouth. The families with no farms depend on menial jobs earning less than two dollars a day. Institutions like schools and churches have devised free lunch programs to keep the children in schools. Insufficient food and lack of a balanced diet put the children at risk of lifelong physical and learning disabilities. It is this need that caught the attention of Dr. Ruben and Dr. Robin West son and daughter-in-law of Rosetta West. The couple was touched and decided to do something – help build a decent kitchen and dining facility at Glorious Life Learning Center.

“Donating this kitchen and naming it after my mother is directly in line with who I have known her to be all my life.” ~ Dr. Ruben West

Pastor Rosetta West started in youth ministry at the age of 17. She has had various positions in several churches including Sunday School teacher, Young People Willing Workers (YPWW), choir and Sunshine Band (children’s choir) director. She was appointed International Sunshine Band Ambassador because of her willingness to serve. She has served at El Shaddai Ministries for 25 years starting as the Youth Pastor and now serving as an Associate Pastor. She has been a voice and mentor to countless youth throughout the years. In 2018 Pastor West received the I Change Nations Susan Maxine Gibson Global Messenger of Hope Award for her inspirational work and her commitment to enhancing the lives of others. In 2016, she received the President’s Lifetime Achievement Award from President Barack Obama for her volunteer service of over 4,000 hours to the citizens of the United States of America.

On July 18, 2021 at the building dedication ceremony, Pastor West was overwhelmed with emotion when she saw her name on the building. The kitchen and dining facility has the capacity to serve about 50 children as well as modern kitchen equipment, including a refrigerator.

Pastor Rosetta said she is in the legacy stages of her life and this was a crowning moment. She knew the kitchen was being build but never had any idea it would be named in honor of her years of service.

Dr. West loves this quote from Calvin Coolidge, 30th President of the United States, “No person was ever honored for what he received. Honor has been the reward for what he gave.” This is the exact reason Dr. West and his wife Robin donated and named this facility after Pastor Rosetta. She is and always has been a cheerful giver.

The Rosetta West Kitchen and Dinning Facility will be used by the school, the local church and the community.