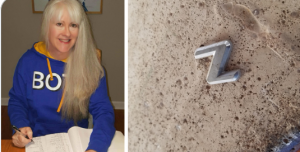 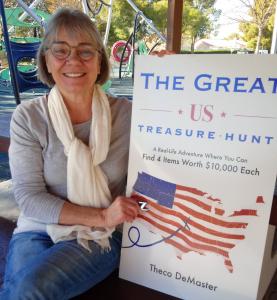 This is an amazing first finder”
— David Steele

AUSTIN, TX, UNITED STATES, December 26, 2020 /EINPresswire.com/ — “The Great U.S. Treasure Hunt,” an e-book containing clues leading to four items in four locations, each item worth $10,000 to the finder, has delivered its first winner just over one month from the contest’s launch.

Beth Hovanec solved the message in Chapter 4 and partnered with a North Las Vegas woman, Nancy Zitko, who found a hidden item stuck under a bench at Eldorado Park. The team will split $10,000.

Hovanec, a Pittsburgh-area artist, had been trying to decode the e-book’s hidden message since its release a month ago, but when she saw a recent clue on Twitter, the method became clear.

She used the first letters of “One Hit Wonders” mentioned in Chapter 4 of the book. The tricky part was choosing whether to use the artist’s name or the song title. But once she worked out the message “North Vegas, Eldorado Bench, Silver Z,” she knew she had it.

Hovanec contacted her friend Zitko, who by happy coincidence lives just five miles from Eldorado Park, and agreed to search the benches for a “Silver Z.”

And the adhesive worked; that Z had been clinging to the underside of the bench for nearly a decade, according to David Steele, vice president of The Great U.S. Treasure Hunt, who placed the Z nine years ago. He would return to Eldorado Park every time he visited, just to see if it was still there. Until Sunday morning, it was.

“This is an amazing first finder,” Steele stated after hearing of Ms. Hovanec’s and Ms. Zitko’s discovery. “Ms. Hovanec kept at it until she decoded the message, and Ms. Zitko found the Z under the bench where I had placed it, beneath the Eldorado Park gazebo.”

Steele explained that when he and his partners decided to launch The Great U.S. Treasure Hunt, the Silver Z would definitely be one of the first four items to find.

“We chose four locations to hide four items across the country,” Steele said. “The clues in each chapter of the book lead exactly to each location and each item. Of course, the Z was already in the spot. At least, it was until today.”

Armchair treasure hunts have become popular in recent years, because they allow treasure hunters to solve clues in their own homes, rather than having to actually go out and dig up treasure. The Great U.S. Treasure Hunt is one of these hunts, with four items hidden, not buried, in public. All the clues necessary to find the items are in the book.

Three items are still to be found, worth a total of $30,000. “The Great U.S. Treasure Hunt” e-book is available exclusively at Amazon, currently $8.88.

AI is outperforming humans in both IQ and creativity in 2021