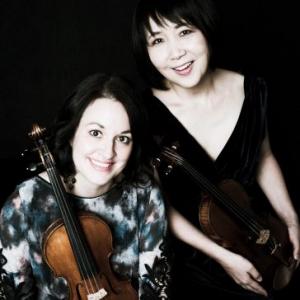 Mioi Takeda and Lynn Bechtold perform virtual concert on VIMEO featuring recent works by composers from Europe, Japan and the US.

NEW YORK, NY, USA, June 8, 2021 /EINPresswire.com/ — MIOLINA will perform ‘Tweet, Tweet,’ a program of works for violin duo, many about birds and songs, by composers from around the world.

They will be premiering Hesam Abedini’s Ghazaliyat No. 1, and Isaac Otto’s Nycticorax. Other works include the US premiere of Dai Fujikura‘s Twin Tweets, and the NYC premiere of Ruth Crawford Seeger’s Diaphonic Suite No. 3, recently arranged by Gilbert DeJean for two violins.

The virtual event will take place on Thursday, 10 June 2021.

They are recipients of numerous grants, including Adami, American-Scandinavian Foundation, Japan Foundation NY, Lower Manhattan Cultural Council, New Music USA, and New York Women Composers. As part of their outreach and educational programs, Miolina has performed at senior centers and soup kitchens, and has worked with students at The Alabama School for the Blind, CUNY/Queens College, The Juilliard School, Rutgers University, and UC Irvine. Featuring works by Alabama composers of the Birmingham Art Music Alliance, their latest album ‘a la BAMA’ was released this past March on CCR/Naxos. In addition, their debut album ‘Miolina’ was released in 2018 on CCR/Naxos. They can also be heard on 2020’s ‘Le Passager,’ performing Jean-Baptiste Favory’s large-scale work UNISONO V, available on label ACEL, as well as on Flower Cat’s 2020 album ‘Symbolic Gesture,’ available on Bandcamp.