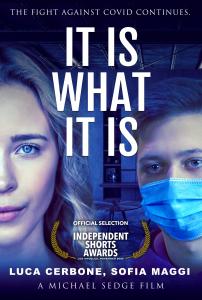 The Italian-American Film, IT IS WHAT IT IS, has been selected to compete for 3 awards at the Independent Short Film Festival, Los Angeles.

When President Donald Trump said the COVID-19 epidemic “is what it is,” he provided producer Michael Sedge the title for his new anti-COVID film

Our goal is to get the word out, do you really need to party, to young adults. This is a matter of life-and-death. Please do your part.”
— Michael Sedge, Film Producer

ROME, ITALY, December 27, 2020 /EINPresswire.com/ — IT IS WHAT IT IS, an eight-minute anti-COVID film starring Italian-American actors Luca Cerbone and Sofia Maggi, portrays a young couple discussing their participation in a Los Angeles party. They attended the event despite the known virus risk. It is not until the end that viewers learn she has become a victim of the virus. The entire discussion, as well as their sharing a glass of wine, is only in the mind of her grieving boyfriend.

“As we were shooting this public-service short film,” said producer Michael Sedge, “we struggled with the perfect title—something that the world would recognize immediately. When president Trump, last August, said that the situation ‘is what it is,’ I knew that was it.”

According to Sedge they wanted to make a film targeting the 16-35 age group—those young people going to bars, parties, and large gatherings that spread the virus. Now, he adds, “The Sedge Group is reaching out to online and broadcast networks around the world to join our fight against COVID-19 to transmit
the film and get the world out.

Sedge says that, “Our goal is to get the word out, do you really need to party, to young adults. This is a matter of life-and-death. Please do your part.”

IT IS WHAT IT IS can be screened at https://www.youtube.com/watch?v=eYI-CZlKGqI&t=37s