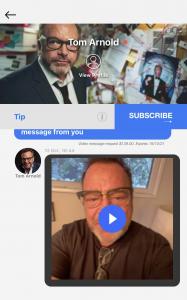 Tom Arnold is the latest celebrity to join the Vanywhere platform. Arnold, who has been active on other fan engagement platforms sees Vanywhere as a gamechanger

Arnold, who has been active on other fan engagement platforms sees Vanywhere as a gamechanger. “I get a kick out of connecting with people. Vanywhere lets me give more than just video shout-outs, there’s a true sense of connection. And best of all, I can do it easily from one single app.”

Vanywhere gives users the option to request a video, voice or text message from Arnold other public figures on the platform. Users can also subscribe for exclusive content that isn’t available anywhere else. Vanywhere focuses on building an ongoing relationship between celebrities and their fan communities. The platform also offers users the option to engage in live, 1-on-1 video and voice calls with their favorite celebs. Whether talking to Arnold about his acting career, hearing behind the scenes stories, or seeking advice about their own comedy careers, Vanywhere gives people a chance to learn from Arnold’s professional and personal experiences.

“I’m big into technology and these guys are using it in a smart way. Direct connections like I can have on Vanywhere are clearly the future of fan engagement.” In addition to the platform’s cutting edge technology, Arnold is also embracing their use of cryptocurrencies by receiving payouts in both bitcoin and dollars.

As Vanywhere plans to release its web platform later this fall, Arnold will be an integral part of the roll out. He is also expected to announce several celebrity friends who are joining the platform, but for now, other than his grin, this comedian’s lips are sealed.

Vanywhere can be downloaded for free in the AppStore and Google Play.