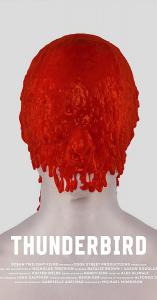 The film deals with racial tensions as it takes a deep dark descent into the desperation of searching for a missing family member.

VANCOUVER, BRITISH COLUMBIA, CANADA, June 4, 2021 /EINPresswire.com/ — Ocean Twilight Films is pleased to announce that their feature film Thunderbird will be available on Amazon Prime Video on June 4, 2021. Thunderbird stars Colten Wilke in his first starring role, Natalie Brown (Sophie, Clarice, The Strain, Dark Matter), Aaron Douglas (Battlestar Galactica, Van Helsing, Dirk Gently’s Holistic Detective Agency) and William Belleau (Blackway, Killers of the Flower Moon, Van Helsing). Written, directed, and edited by Nicholas Treeshin (Tricked, Worst to First, Border Security) is directing his first feature film. Producers Michael Morrison, Colten Wilke, Gabrielle Adelman, and Ben Plamondon bring this story about the fear of the unknown, the pain of guilt, and confronting the darkest parts of our past. The Coast Salish legend of the Thunderbird is an integral part of the story that also deals with racial tensions in a small fishing town on the Pacific Northwest and the search for a missing family member. Constructed against the rugged beauty and danger of this Pacific Northwest, this film takes a deep and dark descent into the desperation of the search.

Will Brook (Colten Wilke) is overcome with guilt when he finds out that his sister has gone missing. Haunted by a recurring nightmare, he leaves the fishing boat he calls home and heads to town to find her. But, his family’s murky history with the First Nations locals puts his life in jeopardy. Newly reinstated detective Ivy Seymour (Natalie Brown) is sent from the city to work on a homicide case as the number of missing women in the area is growing at an alarming rate. When the body turns out to be Sarah’s roommate, Ivy and Will’s paths cross and together they follow clues to catch a killer. Desperate to find Sarah before it’s too late, Will must confront his family’s troubled past and face his demons … no matter how real they may seem.

Thunderbird is based on a story that Colten Wilke first penned when fishing on the commercial fishing boat Ocean Twilight. Producers are grateful for the collaboration and partnership from the communities that contributed to filming a number of the locations used in Thunderbird. All of the halibut fishing in the opening scene is real and was done from the long-line fishing vessel Ocean Twilight. The scenes of William with Chief George (Julian Black Antelope) were all shot in a Kwakiutl big house in Port Hardy, British Columbia, and the extras in attendance were all active members of the local First Nations community. The Hamatsa masks worn by the dancers in the big house are extremely sacred family masks considered hereditary property and are believed to transform the wearers once they are donned.

Director Nicolas Treeshin’s Statement: Thunderbird is a story about the search for a missing girl, but beneath the surface, it’s more importantly about the fear of the unknown, the pain of guilt, and confronting the darkest parts of our past. The main character Will Brook is haunted by the circumstances surrounding his parents’ death and to move forward emotionally he must face his demons…figuratively and literally. The film also deals with racial tensions in a small fishing town on the Pacific Northwest, and because the Coast Salish legend of the Thunderbird was so integral to our story, it was of utmost importance for us to represent the culture of the First Nations peoples accurately. Latash-Maurice Nahanee, an Elder from the Squamish Nation, and Chief David Knox (great-grandson to world-renowned artist Mungo Martin) from the Kwakiutl First Nations were our cultural guides during production. Our team strived to produce a film that has a lasting impact on its audience. Every frame of Thunderbird was constructed to enhance Will’s emotional journey as he searches for his sister. Thunderbird is ultimately about facing your fears…even when they’re capable of eating you whole.

The cast, director and producers are available for interviews, photos and information.