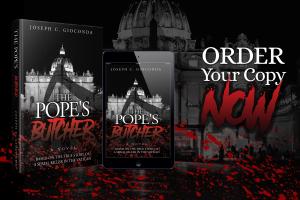 NEWTOWN, PENNSYLVANIA, UNITED STATES, June 4, 2021 /EINPresswire.com/ — A new novel inspired by the shocking true historical account of one man and his penchant for murder and misogyny in the medieval Roman Catholic Church has been released.

An astonishing story that has never been revealed to the public, The Pope’s Butcher recounts the life of Father Heinrich Institoris, the Grand Inquisitor, a visionary man driven to cleanse the world of Eve’s original sin by eradicating any woman he suspects of witchcraft. As Inquisition courts bloom across Europe, he vows to leave no stone unturned, no hovel unexamined, and no woman alive, in his search of his own perverse version of justice.

At a time when women had no power or voice, only one man seeks to stop him. The reader follows the life of Sebastian, a young seminarian who was abandoned as a child but carries with him an innate sense of morality that drives him to stand up for even the most vulnerable victims against his own Church. Will such a humble man be able to stop this powerful murderer, a killer even the Pope admires?

Inspired by true historical figures and events in the 15th Century, The Pope’s Butcher is the debut novel of Joseph Gioconda, seasoned trial attorney, Yale Law School graduate and Catholic seminary graduate. This astonishing account of religion, witchcraft and the occult in the Middle Ages reminds us that violence against women is as old as civilization itself and we must understand the events of the past, so we never repeat them.

More information is available at www.thepopesbutcher.com. Amazon is giving away free Kindle copies of The Pope’s Butcher from Friday, June 11 to Tuesday, June 15.

Free Advanced Reader Copies are available to reviewers and members of the. One hundred free digital copies are also being offered in a giveaway on GoodReads.com.

The book is now available in paperback, hardcover, and eBook/Kindle on Amazon, Barnes & Noble, Ingram Spark and from other retailers and distributors. An audiobook will be released in August 2021.