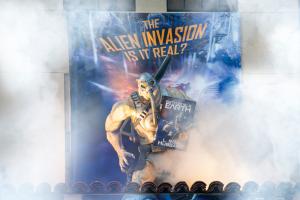 Terl, alien security chief on “Battlefield Earth” by L. Ron Hubbard, returns five years after he crashed on Hollywood Blvd for the release of the international bestselling novel with his copy of the book in time for Father’s Day.

Alien Returns to Hollywood Blvd with Copy of the 21st Century Edition of Battlefield Earth: A Saga of the Year 3000 by L. Ron Hubbard in Time for Father’s Day

LOS ANGELES, CA, UNITED STATES, June 18, 2021 /EINPresswire.com/ — Five years ago this week, an alien spaceship crashed onto Hollywood Blvd. Today, the alien that exited the spacecraft returned and was spotted once again in the front of Galaxy Press. Only this time, the malevolent alien security chief Terl from the planet Psychlo—the novel’s chief villain—found the book he was looking for, Battlefield Earth by L. Ron Hubbard. While he may have initially intended to send it to his dad in celebration of Father’s Day, it looks more like the first title on his summer reading list.

Battlefield Earth is an intergalactic roller coaster, a science fiction saga of adventure, daring, and courage when man is an endangered species, and the future survival of what’s left of the human race is at stake. In 1977, NASA launched the space probe Voyager 1. One of its missions: answer the question—is there intelligent life beyond our planet? Fast-forward a thousand years. Question answered.

Five years ago this week also marks the release of the 21st Century Edition of Battlefield Earth and the multiple-award-winning audiobook.

Since its initial release in 1982, Battlefield Earth has sold over 4 million copies and was rated #3 of the top 100 novels of the 20th Century in the Modern Library Readers Poll. The trade paperback edition has 50 pages containing handwritten author notes made as he wrote the book, along with an interview published in the Rocky Mountain News shortly after the book’s release.

The multiple award-winning audiobook—Audiofile Magazine’s Audiobook of the Year and the Audio Publishers Association’s top honor, the Audie Award— is 47 ½ hours long, with 67 voice actors, 150,000 sound effects, and 3 hours of original music. And with its immersive sound, it is a true movie in the mind.
Whether for Father’s Day or your next summer read, the Battlefield Earth book and audiobook are available at Amazon, Barnes & Noble, Books-A-Million, Indigo, or your favorite Indie bookstore.

For more information, go to www.BattlefieldEarth.com.