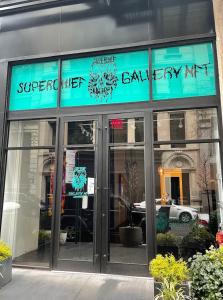 Bringing together nearly 50 of our favorite Superchief artists into a gigantic salon show, we have the honor of including an authentic and certified work of Jean-Michel Basquiat as a centerpiece of the summer long showing at 99 Spring Street.

This will serve as the world’s first exhibition of physical artwork that can be purchased via NFT.

Superchief Gallery NFT, the world’s first physical NFT gallery, has developed a process through their partnership with Ether Cards, to sell physical, traditional artwork via the mechanism of an NFT – creating a brand new opportunity for crypto collectors to enter the market, allowing them to collect physical artwork they have purchased on the blockchain.

In a world’s first, Superchief Gallery Soho will be minting the CONSIGNMENT AGREEMENT itself as a NFT and using that as the mechanism for selling the artwork in this 9th Anniversary Group Exhibition, by presenting those NFTs for sale on the Superchief Gallery NFT Marketplace.

This new type of NFT has an attribute that can be redeemed at any time, and only when the digital token is redeemed will the physical artwork be sent to the collector.

Opening on Saturday June 12th, 2021 at the gallery’s traditional exhibition space in Soho as well as the new NFT gallery located 13 blocks north in the East Village, Superchief will host parallel receptions at both venues from 3-6pm and a party at the Soho location from 6pm-9pm.

The exhibition is the first to present the concept of NFT as both an emerging artistic medium as well as a revolutionary vehicle for commerce within the art market.