Rare and important George Jones giraffe and stag centerpiece, modeled as a giraffe and a stag beneath a turquoise bowl decorated with branches and leaves (est. $20,000-$25,000). 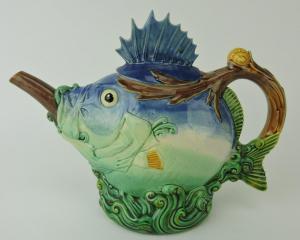 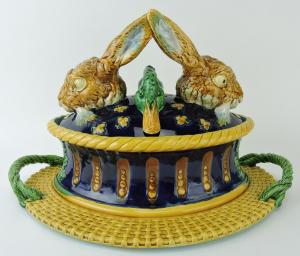 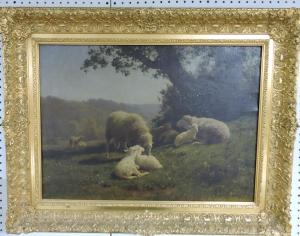 Also up for bid will be wonderful examples of Minton and Mt. Washington, plus World War II collectibles. In all, nearly 2,000 quality lots will be auctioned.

Of special interest is the Ann and Robert Fromer collection of majolica, assembled over more than thirty years. The Fromers were avid collectors. The pieces in their collection are outstanding.”
— Michael Strawser

WOLCOTTVILLE, IND., UNITED STATES, May 4, 2021 /EINPresswire.com/ — A four-day Antique Auction bursting with nearly 2,000 lots of quality items, including important collections of majolica, Pickard china, World War II collectibles, Fenton glass and more will be held May 26th through 29th, by Strawser Auction Group, live in the gallery at 106 East Dutch Street in Wolcottville, as well as online via LiveAuctioneers.com.

“Of special interest is the Ann and Robert Fromer collection of majolica, assembled over the course of more than thirty years. The Fromers were avid collectors,” said Michael Strawser, the president of Strawser Auction Group and founder of the Majolica International Society. “The pieces in their collection are outstanding. The estate collection of Pickard china is also superb.”

Day 4, on Saturday, May 29th, at 9 am Eastern, will be a majolica and ceramics auction, headlined by the Ann and Robert Fromer collection of majolica, plus more than 300 pieces of Pickard, R.S. Prussia and more. It’s the day serious collectors of majolica, Pickard and other fine items will be waiting for. Three items in particular are expected to attract much bidder attention.

The first is a George Jones rare and important large giraffe and stag centerpiece modeled as a giraffe and a stag beneath a turquoise bowl decorated with branches and leaves, all emitting from a tree trunk central pedestal, perched on a circular earthy ground pedestal base, 14 inches tall by 14 inches wide. This piece is the centerpiece for the rare George Jones “continents” compotes of Africa, America, Asia and Europe (est. $20,000-$25,000).

The second is a Minton iconic majolica game tureen and cover, the base modeled as a decorative oval pate’ mold in yellow ochre and blue resting on a fixed basketwork tray with rope handles. The cover has the heads of two hares and two ducks realistically colored and symmetrically arranged on a cobalt glazed dome studded with yellow florettes. The tureen, with some professional repair, should sell for $25,000-$35,000.

The third is rare Minton majolica blowfish teapot and cover, modeled as a fantastic fish with brown spout emerging from its mouth, supported on green waves and with a brown seaweed handle with snail, the cover having a spikey dorsal fin (est. $10,000-$15,000). The 7-inch-tall teapot was originally part of the Charles Washburn collection; he used its image on his business card. It later became part of the Ann and Robert Fromer collection.

Ever since he began conducting auctions over 35 years ago, Michael Strawser has stood committed to delivering services far beyond the norm so that clients could receive results far beyond the expected. Today this commitment stands stronger than ever as the cornerstone of the Strawser Auction Group, one of the most respected auction resources in the Midwestern U.S.
Over the years, the Strawser Auction Group has organized and conducted virtually every type of auction: antiques, estates, real estate, collectibles, business liquidations and more. This diversity has produced a wealth of knowledge not found in any book, but one that can only be acquired through doing. Strawser Auction Group is proud of its reputation and the respect it’s earned.
Since 1979, Michael Strawser has provided dealers and collectors alike with professional auction services – appraisals, consulting, evaluations – and, of course, sales. Always on top of market trends and demands, Michael fuels his diverse expertise with a real enthusiasm for collecting. His commitment to knowledge, organization and quality has earned him the respect of the collector community and positioned the Strawser Auction Group as a benchmark of the industry.

The Strawser Auction Group is always in the market for quality items for future auctions, especially majolica, Fenton, Pickard, Mt. Washington, R.S. Prussia and related merchandise. To consign a single item, an estate or a collection, you may call Michael Strawser at (office): 260-854-2859 or (cell): 260-336-2204; or, you can email him at michael@strawserauctions.com.

To learn more about the Strawser Auction Group and the four-day Antique Auction planned for May 26th-29th, live and online, visit www.strawserauctions.com. Updates are posted frequently. There will be telephone bidding for items $2,500 or more, and absentee bids will be accepted.