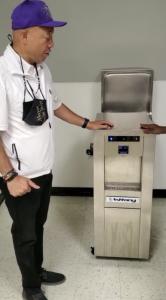 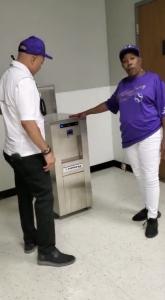 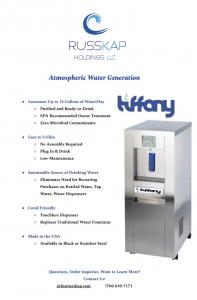 The Tiffany unit generates up to 12 gallons of purified water a day.

RussKap Holdings announces the completion of a pilot program to bring atmospheric water units to residents of Flint, MI to help with the toxic water crisis.

“We are so pleased to provide the residents of the city of Flint with an innovative solution that makes certain there is no lead or toxins in the drinking water. While many companies have tried to solve the issue, RussKap has become the only one able to conclude a pilot with the city where the units worked in all the conditions necessary to be successful. The units efficiently make cold, great tasting, safe and purified drinking water from the humidity in the air.

Yehuda Kaploun, President of RussKap Holdings said “we have had numerous conversations with senior staff and the mayor to create a program to provide residents with a healthy plastic-bottle-free drinking water solution. The launch of this program, spearheaded by Mayor Sheldon Neeley, will provide many units to the people of Flint who deserve the best solutions after suffering through some of the worst problems with drinking water in the USA.”

Beverly Lewis, Director of the Hasselbring Senior Center, which coordinated and supervised the pilot program, says that this unit provides the healthiest and best tasting water that the residents of the senior center have had access to. This replaces water fountains that were providing the bad water during the water crisis in Flint.

This novel approach is made possible because the RussKap “Tiffany” model and the other RussKap units are manufactured by Altitude Water using the patented ozone technology that is recommended by the U.S. EPA. This results in toxin-free water created at the location point where the water is dispensed.

This allows for a major reduction in disposable plastic bottle usage and reduction in waste which has also impressed the mayor and his staff in Flint.

Greg Breunich, CEO of Altitude, has recently announced the expansion of his manufacturing facility to meet the new orders from the city of Flint and the U.S. Military. He stated that RussKap is the largest provider of atmospheric water generator units to the U.S. Department of Defense and we are thrilled to now be part of the solution in Flint, Michigan and bring the city clean water.