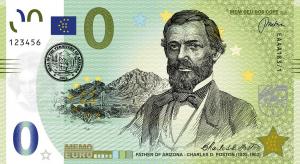 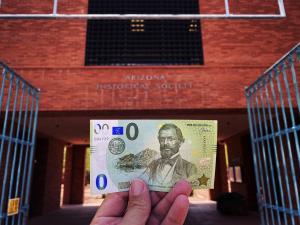 Rotary Arizona Announces the Issue of its Own Banknote

SCOTTSDALE, ARIZONA, USA, July 20, 2021 /EINPresswire.com/ — Arizona’s founder and first House of Representatives, Delegate Charles D. Poston (1825-1902), would certainly raise his eyes in disbelief to have his portrait used on a banknote 119 years after his death. In his life, Poston already mentioned plans to produce an Arizona banknote. With this Charles D. Poston Banknote, through the initiative of Rotary Scottsdale’s former president Richard Signeski, it now is a reality. The Scottsdale Rotary Club, in collaboration with MemoEuro.world, issues this limited edition Charles D. Poston commemorative banknote as a charity fundraiser. The banknote is a collectible and charity fundraiser, it is not a legal tender.

Richard Signeski: ‘As Rotary Scottsdale, we were looking for a special product to illustrate the history of our State and incorporate Rotary’s message, resulting in the release of the first Rotary banknote.’ Production of the banknote has been made possible by MemoEuro.world. According to Michel Jacobs, CFO of MemoEuro.world, charity fundraising is one of the many suitable applications for their product.

The banknote is produced at a high-security printing facility and includes the same security features and printing techniques found in Legal Tender banknotes. Including micro text, watermark, security fibers, UV, holographic foil, intaglio printing, embossment, and serial numbering. A closer look reveals the high level of detail used in design and finish. It is rare to see these materials and techniques on a product that is not issued by a government, making this banknote a unique collector’s item and the first of its kind on the American market.

Renowned Slovakian artist Rudolf Ciganik made the drawings of Charles D. Poston and Paul Harris. Ciginak’s engraved drawings are found on banknotes and postmarks released internationally. MemoEuro.world’s art director Christian Petermann explains that he chose Ciganik’s style best to reflect the character and charisma of both Poston and Harris, with whom the note actually features two American States. Arizona with Poston on its front, and Racine, Wisconsin with Rotary founder Paul Harris on the reverse.

Former Rotary president Richard Signeski is delighted, and the note will be made available for purchase soon. President Joe Biden and Arizona Governor Doug Ducey are set to receive serial numbers 00001 and 00002. For more information, visit https://www.scottsdalerotary.org/.