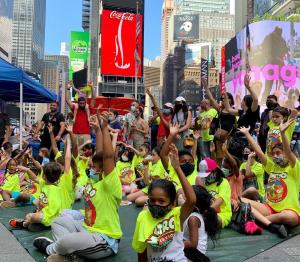 Metro’s staff members dressed in bright neon T-shirts, distributed candies and fliers, and had several highly engaging sessions from their iconic yellow Metro sidewalk truck at the center of Times Square. There were interactive games, Bible stories, prayer, and raffles for a TV, a laptop, and a hoverboard as part of the celebration. There were over several hundred kids and adults from all over the world participated in their programs today.

Some former Metro kids joined the celebration. Veronica Jimenez, a women’s conference speaker now, who attended Metro’s program 40 years ago when she was 12 years old, said “Attending Metro’s program was the only happy memory I had growing up in an abusive environment in Brooklyn. I can’t imagine how my life would have turned out without it. I am so thrilled to see Metro is still serving the city today after 40 years.” Quite a few locals came to the staff members to share their Metro story when they were a child, including a security guard in Times Square.

Pastor Bill Wilson, the founder of Metro World Child in his opening address with the NYPD told the crowd, “Metro continued to serve New York City during the pandemic through the food pantry and online children’s program. We are excited to celebrate the city reopening and ready to go back to the street to serve the kids!”

At 72, still driving the school bus to pick up kids for Sunday school, Pastor Bill said, “Out of my own painful experiences as a child, one man made a difference in my life, putting me on the path to do the same thing for children all over the world who are just like I was. That’s what I’ve spent my entire adult life doing. I am grateful that I can continue to serve New York City and this great country I love.”

Metro World Child, was founded in 1980 in Brooklyn, New York by Reverend Dr. Bill Wilson. His original passion when he moved to New York was to reach at-risk, inner-city children exposed to violence, crime, drugs, gangs, neglect and poverty. As an abandoned child himself by his alcoholic mom when he was 12 at the street corner in St Petersburg, Florida, he knows the desperation of hopelessness at the young age. His heart was to reach children through high-impact, fun and exciting Sunday School services.

Now, 40 years later, Metro World Child is still headquartered in the heart of Brooklyn, reaching thousands of inner-city children and their families through fun and engaging Sunday School services, personal visitation and mentorship programs in the 5 boroughs of New York City. Before Covid, Metro served on average over 20,000 children in New York each week. Their global outreach now is much greater though; they are currently in a total of 13 countries, reaching over 250,000 children weekly. Metro World Child is now the largest Sunday School in the world.