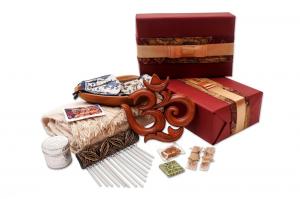 “Our Undiscovered Box transports subscribers on a fascinating journey of discovery,” said Roberto Milk, cofounder and CEO of NOVICA, adding, “inspired by our own journeys traveling to meet with local artisans, experiencing traditional arts and cultures from an insider’s perspective. Each Undiscovered Box changes the life of an exceptional artisan, who helps curate an amazing box brimming with remarkable, tangible cultural keepsakes.”

Shipped four times per year, each Undiscovered Box showcases exquisite gifts, jewelry, and decor from a specific nation. Each new box is carefully curated by an artisan guide – a master artisan chosen from that country – who aims the spotlight on inspiring, undiscovered local artisans. The local artisan guide/curator selects the featured offerings from NOVICA.com’s ever-expanding library of more than 100,000 fair trade handmade goods available from participating artisans around the world.

“Our dream with the Undiscovered Box is to create an artisan subscription box so special and compelling that customers become subscribers for life,” Milk said. “We know how rare this is in the subscription box space. All our special touches – from the five beautiful, handmade artisan treasures inside each box, to the keepsake cards from those artisans, to their insider travel tips, favorite traditional recipes, and recommended traditional music links, to the surprise gift from the artisan-curator – everything combines to provide our subscribers with a deeper and more personal connection to inspiring artisans in far distant lands.”

The first treasure-filled Undiscovered Box leads subscribers off the beaten path for a virtual “insider’s journey” into the traditions and cultures of Bali. This box will ship to subscribers in Autumn 2021 and is curated by Master Artisan Seji Taram, a Balinese woodcarver who remained unknown outside Bali until she joined NOVICA. Taram’s magnificent carvings have earned her a place among NOVICA.com’s most sought-after artisans. Her life has transformed accordingly.

Future boxes will immerse subscribers in the mystical highlands of Cuzco, Peru; the ancient traditions of Lake Atitlan in Guatemala; and into the many other culturally diverse regions where NOVICA’s international offices have worked closely with local artisans for more than twenty years, bringing their finest creations to a worldwide audience.

“Our box is a virtual journey for the recipient, one that delivers cultural experiences directly to our subscribers’ doorsteps,” explained NOVICA Cofounder Mina Nercessian. “It is inspiring to note that every box deeply impacts talented and deserving artisans. Make no mistake,” she added, “the Undiscovered Box is a life-changing opportunity for each participating artisan. As a result of the Undiscovered Box, featured artisans will receive significant orders for their handmade goods. And they will earn loyal new customers for their existing portfolios of artwork on our NOVICA website as well. Each artisan greatly appreciates this incredible opportunity to share their talents, and their own personal story with our global audience of subscribers.”

Since its launch in year 2000, NOVICA has become the most successful online fair trade marketplace in the world. In 2020 Novica added subscription box expertise to its mission-driven team when it acquired Love Goodly – one of the most trusted and award-winning subscription boxes in the clean beauty space – and hired its two cofounders to help launch NOVICA’s Undiscovered Box.

Undiscovered Box details: Each Undiscovered Box ($59.99 per box, delivered four times each year) features (customizable) handcrafted works of art from a specific region (valued at over $200 per box), along with bonus cultural information, artisan keepsake cards, insider travel tips, links to recommended traditional music, the regional artisan guide’s instructions for making a favorite traditional recipe at home, and a bonus thank-you gift from that guide. New subscribers may join at any time of year (undiscovered-artisan-box.com) to receive the next featured Undiscovered Box.

About NOVICA
NOVICA is the most successful online fair trade marketplace in the world. Since launching in year 2000, NOVICA.com has sent more than $113 million directly to artisans. Mission-driven to empower artisans and preserve cultures worldwide, NOVICA features the biographies and creations of thousands of master artisans who sell a selection of more than 100,000 limited edition treasures to retail customers at NOVICA.com. Offerings range from handmade jewelry and apparel to handwoven rugs and tapestries, to hand-carved decor and collectibles. NOVICA pioneered this massive, direct, artisan-to-consumer online gallery concept in the year 2000, for artisans in developing nations. NOVICA is headquartered in Los Angeles, with eight regional offices around the world. In 2020, NOVICA expanded into the subscription box world when it acquired Love Goodly, one of the most trusted and award-winning subscription boxes in the clean beauty space. In so doing, NOVICA joined other fair trade businesses in the ethical subscription box space such as GlobeIn and Causebox (now Alltrue). In September 2021, NOVICA launched the Undiscovered Box (undiscovered-artisan-box.com) – a quarterly, regionally-themed, curated subscription to fair trade, handmade global treasures.