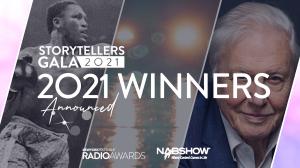 TBI Media is Production Company of the Year; 2021 Grands Go to I’m Not A Monster, The Hobbit, and Weightless

The BBC was honored with the 2021 Broadcaster of the Year Award. Award-winning entries captivated listeners with exceptional storytelling in News, Podcasts, and Dramas. Exceptional entries honored with the NYF Radio Awards Gold trophy include: “I’m Not A Monster” and “Where Is George Gibney?”.

“We’re delighted to receive the award for 2021 Broadcaster of the Year. We’re especially proud of the recognition from the New York Festivals this year for I’m Not a Monster, our collaboration between BBC Sounds, BBC Panorama and Frontline PBS, and Where is George Gibney? from Second Captains, but also of all of the teams and collective effort across the BBC that goes into making impactful public service radio and podcasts and bringing these stories to audiences across the world.”—Dylan Haskins, Commissioner, BBC Sounds & BBC Radio 5 Live

TBI Media UK earned the title of Production Company of the Year. Known for award-winning programs and live events created for TV, Radio, online, and brands, the London based company earned multiple Gold trophies for their work for high profile clients including the BBC.

“The whole of the TBI team are thrilled with the awards won this year, and of course to be made Production Company of the Year is a particular honour. We’re all lucky to be living at such an important time for audio production worldwide, where anybody with a good idea and the drive to deliver it can now find a platform where it can be heard, and it’s great to see that opportunity reflected so comprehensively across all of the results in this year’s awards.” –Phil Critchlow – Founding Director & CEO – TBI Media

I’m Not A Monster – from BBC Panorama & FRONTLINE PBS – News Programs: Best Nonfiction Series (BBC) The 10-part series explores journalist Josh Baker’s four-year odyssey to uncover the complex truth about an American family’s journey from Indiana to the Islamic State’s caliphate and back again to the US.

The Hobbit, By J.R.R. Tolkien, Read by Andy Serkis – Audio Books: Best Narration – Solo (HarperCollins Publishers) The new Hobbit recording was inspired by an extraordinary charity effort that raised over £300k for Coronavirus charities. This led to actor Andy Serkis narrating this newest recording of The Hobbit. Serkis, who voiced “Gollum” in the film recorded this magical performance of the classic text with affinity for the Tolkien world.

Weightless – Podcasts: Drama Podcast (DMC Studio Argentina) The podcast tells the story of a character who has reached a critical moment in his life and deceives himself by telling a story that abounds with emotions, memories, and sensations. Weightless uses sound elements and song samples from different periods of the character’s life to illustrate his epic journey.

Powerhouse entertainment entries recognized with Gold include “There Used To Be A Me” (Spiteful Puppet Entertainment & AUK Studios), “Stripey tales/ Randiga sagor” (Sveriges Radio), and “Musicals: The Greatest Show” and “Laura Whitmore” (TBI Media). “Q with Tom Power” (CBC) was honored with a Gold trophy in Craft: Best Interview.

This year is the eleventh year of NYF’s strategic partnership with NAB Show, the ultimate marketplace for people passionate about media, entertainment, and technology.

Entries to each of the competitions are judged around the world by panels of peers in their respective industries. For more information, go to www.newyorkfestivals.com.

About NAB Show
NAB Show is the world’s largest and most comprehensive convention encompassing the convergence of media, entertainment and technology. NAB Show is where global visionaries convene to bring content to life in new and exciting ways.

About NAB
The National Association of Broadcasters is the premier advocacy association for America’s broadcasters. NAB advances radio and television interests in legislative, regulatory and public affairs. Through advocacy, education and innovation, NAB enables broadcasters to best serve their communities, strengthen their businesses and seize new opportunities in the digital age. Learn more at www.nab.org.