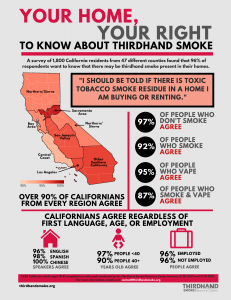 Survey shows that the overwhelming majority of Californians want to know if the home they are about to buy or rent contains toxic thirdhand smoke.

96% of California adults say they want to know if the home they are about to purchase or rent contains toxic tobacco residue known as thirdhand smoke.

SAN DIEGO, CA, USA, June 2, 2021 /EINPresswire.com/ — A poll conducted by California’s Thirdhand Smoke Resource Center at San Diego State University found that 96% of Californians believe they should be informed if the home they are about to purchase or rent may contain toxic tobacco smoke residue, otherwise known as thirdhand smoke.

Thirdhand smoke is the invisible and persistent chemical residue left behind from tobacco smoking in carpets, doors, walls, and furniture that can persist for years after smokers move out. It sometimes can be seen as a yellow stain or smelled as the yucky odor of stale tobacco smoke. But more often, it is painted over, brushed aside, and covered up without addressing the underlying problem: years of tobacco smoke pollutants that remain after smokers move out. Even if you don’t smoke, thirdhand smoke can endanger your health and the health of your loved ones, if previous residents of your home smoked.

Support for disclosure was above 90% in all regions of the Golden State, ranging from 90% along the Central Coast to 98% in the Sacramento area. Agreement was higher among those 39 year and younger (97% agreed) compared to 40 years and older (90% agreed). Even among people who said that they smoke or vape, support was high with 87% expressing agreement. It is clear that most Californians care about the presence of thirdhand smoke in their homes and believe this information is relevant to buying or renting a new home.

Current policies require disclosure of some environmental hazards in the home, such as lead, mold, or radon, but they do not require disclosure or testing for toxic tobacco smoke pollutants, information that is especially relevant during the pandemic. The results of this survey support accurate disclosure of past smoking in real estate transactions and rental contracts. Such disclosure would benefit buyers, renters, sellers, as well as apartment managers and realtors. The results also suggest public support for additional action to ensure tobacco-free environments throughout the State.

California has long been a national leader in tobacco control. The results of this survey suggest a new area for leadership: routine disclosure of tobacco product use and education about thirdhand smoke in real estate transactions, including sales and rentals, to protect Californians from exposure to toxic thirdhand smoke. The overwhelming majority of Californians want to know if their homes are safe.