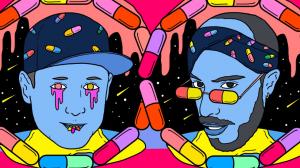 A unique collaboration between the French-Israeli artist and the American Billboard Comedy rapper and comedian Rucka Rucka Ali resulted in this release.‬‬‬‬‬‬‬

It was an honor and a true pleasure to collaborate with Rucka Rucka Ali on this project that we hope entertain people but also help raising awareness to the major issue of drug abuse in our society.”
— Jeremie

PARIS, FRANCE, September 20, 2021 /EINPresswire.com/ — Jeremie’s music video for the remixed single ‘‪Pill Popper’ from his upcoming full-length album ‘Americana’ is released today. The official release is the result of a unique collaboration between the French-Israeli artist and the American Billboard Comedy rapper and comedian Rucka Rucka Ali.‬‬‬‬‬‬‬

Prior to releasing this remixed version, the original song (released under the same title in 2018) was written by the Jeremie with the purpose of raising awareness and criticizing the excessive drug and pill use among youngsters and musicians around the world. The music video ends with the hashtag #StayAlive, includes statistics about global drug abuse and related deaths as an act of concern with the hope to encourage more artists to follow.

The new music video released today features animated versions of the French rapper and the American parodist, driving around a nondescript American town, encouraging different characters to consume pills all while being portrayed as pill producers in a laboratory.

The remixed version of ‘Pill Popper’ was co-written by Jeremie & Rucka. It is a follow-up commentary tackling the serious ongoing issue of pill and drug abuse in American society, specifically focusing on the widespread abuse of Prescription Medication across the United States.

This song is the first released musical collaboration for the American parodist and Youtube personality Rucka Rucka Ali with the recording artist Jeremie. For the American Youtube sensation Rucka, who accumulated more than 300 million views on his Youtube channel to date and got massive public attention for his explicit rap songs, this cross-collaboration marks a shift from creating musical remarks and parodies, to participating in original music production.

About Rucka Rucka Ali
Rucka Rucka Ali is an American rapper, singer, songwriter, radio personality, comedian, YouTuber and parodist. He is best known for his dark humor political and topical song parodies on YouTube. The comedian has amassed to date 346 million views and 1.42 million subscribers on YouTube. He has released eight independent studio albums, four of which have charted in the Billboard’s Top Comedy Albums.

About Jeremie
Jeremie is a French-Israeli Artist, rapper-songwriter and electronic music producer. He began his career as a DJ and keyboardist, moving later to becoming the music producer of ShiraneMusic duo alongside his vocalist sister Shirane. The French rapper also acts as a signed shadow lyricist for other musicians. He announced his full length hip-hop solo album titled ‘Americana’ to be released later in 2021 under Red Shoes Records label which he co-founded.