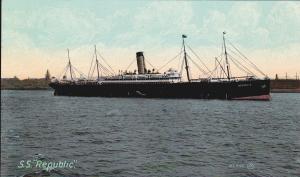 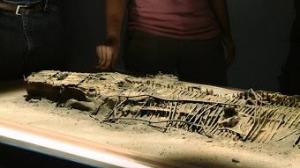 The RMS Republic, as she rests on the ocean’s bottom.

Possibly Largest Lost Treasure in History Soon to be Recovered, The Tsar’s Treasure Conservatively Estimated at $4 Billion to $7 Billion

We are looking for investors who would be a good match for the project. Someone who thrives on risk and adventure. … This will be an historic mission and accomplishment.”
— Capt. Martin Bayerle

BAL HARBOUR, FL, UNITED STATES, June 7, 2021 /EINPresswire.com/ — No, not that kind of booty. We are talking sunken treasure here, specifically the fabled lost golden cargo of the White Star Line shipwreck of the RMS Republic.

The Republic was the largest ship to sink in history when she collided with another ship in dense fog on a cold early morning in January 1909, after leaving New York to go to Europe. After the collision, her wireless operator tapped out the first wireless distress signal in history for a major open sea-rescue. A number of ships groped through the dense fog to find the heavily injured vessel over the next day. Eventually, the passengers (many of whom were very wealthy) were taken off and told to leave all of their belongings behind while they towed the ship back to the coast for repairs. It was during this tow, about 39 hours after the initial collision, that Republic finally slipped beneath the waves.

At the time, the depth at which the Republic sank, about 270-feet of water, was beyond any diving or salvage technology of the day. At 585-feet long and weighing 15,000 tons, she was the largest ship to sink in history (surpassed by her younger, bigger sibling Titanic just a few years later). In the days and weeks after she sank, newspapers mentioned a “valuable cargo” went down with the ship, a “large sum of money” that was lost. A World War soon followed, and the Great Depression, but the reports of Republic’s riches carried on, always vague, always just outside of realistic reach and left to the imagination of swashbucklers and enterprising adventurers. The latest research and appraisal of the cargo, which would be made up of a variety of turn of the century U.S. gold coins, could place today’s value of the gold contained within the wreck as high as $4-7 billion.

So what’s stopped someone from recovering the gold until now? Well, there has been interest and a couple early salvage attempts. The decks of the ship have all collapsed, giving the cargo the protection of essentially a five-story building collapsed directly on top of it, 270-feet underwater where visibility is limited, sharks make their rounds, and currents can whip up and drag any venturesome diver off the wreck with short notice. Any attempt prior to the late 1950s by divers would have left them heavily “narc’d,” essentially drunk on the compressed nitrogen content during their small 30-45 minute window for bottom time on the wreck. The advent of “saturation diving” in the 1960s and 1970s extended bottom time significantly, divers lived at the bottom pressure aboard diving and salvage ships for weeks at a time, being able to spend 8-10 hour stints at the bottom, heading from their small pressurized world on the ship above the surface to the bottom of the ocean in pressured diving “bell.” There was a lot of renewed interest in Republic during this time period and a couple of salvage attempts, but all soon found that there were no shortcuts to Republic’s hoard of gold, deep within the tangled wreckage of the ship. Navigation around the wreck site was difficulty, too, with only primitive sonar and underwater video capabilities. The only path to the treasure would require a complete top-down excavation through the collapsed decks, a major job, requiring millions in financing and using some of the biggest salvage tools the world has to offer. Enter into the picture giant hydraulic grabs, LIDAR and BluView underwater imaging, and the latest CrowdFunding CF SEC Regulations, and we have ourselves the possibility of a real, potentially highly lucrative treasure hunt.

And that is the current plan. Capt. Martin Bayerle’s company, Martha’s Vineyard Scuba Headquarters, Inc., now owns legal title to the wreck and the cargoes as a result of a court battle going back decades, to the 1980’s. Bayerle has been researching and pursuing Republic’s gold for the majority of his life. He’s fended off governments, interlopers, and competitors from the prize, and now he and his son, Grant Bayerle, a California attorney, plan to reel in the big fish, what many have called the “great white whale” of shipwrecks. The RMS Republic wreck is there, it exists, tauntingly within reach, but she has rebuffed off all prior attempts.

“The only way in is through, there are no shortcuts. The technology exists to now 3-D map the entire wreck site and chart our excavation to the gold chamber carefully and efficiently. We can follow the action top-side using live, updated 3-D scans, instead of relying on blurry videos and diver narrative. In fact, we can probably reach the gold cargo without divers participating in debris removal, and only utilize divers for their dexterity and ferret instinct in recovering the coins. This is a novel approach.”

The tools and personnel the company plans to utilize include a salvage barge and 1000-ton crane with giant, hydraulic grab, the same “kit” that was utilized to salvage the cruise ship SS Condcordia which foundered off the coast of Italy a few years ago.

Republic is the largest treasure wreck in history, with perhaps the largest treasure. “We are looking for investors who would be a good match for the project. Someone who thrives on risk and adventure. Someone who is willing to don an Exosuit and wants to be on the ship and go down visit the wreck of Republic first-hand once we’ve cleared the way. This will be an historic mission and accomplishment.”

Capt, Bayerle’s Lords Of Fortune company will be performing the recovery. There are two offerings available, a Regulation D for accredited investors only, which offers the biggest upside, and a Regulation CF for the general public available through WeFunder.com, which allows anyone to participate with small investments and different perks. “We plan to conduct a 3-D survey in late-Summer or early-Fall 2021, and begin planning for the major 2022 recovery using the 3-D survey as our map.”