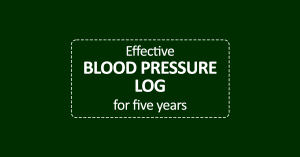 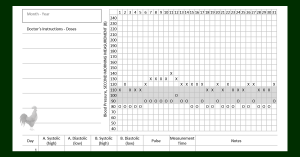 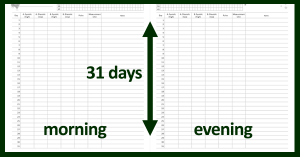 ATHENS, ATTICA, GREECE, July 31, 2021 /EINPresswire.com/ — When the managing director of Crystal Cut (also a software designer) saw his father write his blood pressure monitor readings on plain paper, he searched for a more effective solution. He understood that something different was needed for such a critical matter.

Physicians ask patients about their blood pressure history and, most of the time, recommend that they take measurements at home and keep them logged. Often, they give them an appropriate paper form on which to do so. Additionally, certain renowned organizations have created similar forms, which can be downloaded from their sites and printed for use as paper logs. Relevant paper logbooks can also be found online and in stores.

On the other hand, most contemporary blood pressure monitors have a memory that can store measurements, and many of them can connect to a smartphone or personal computer and share these measurements. Moreover, there are digital applications into which patients can import their measurements and share them with their physicians, deriving useful information depicted in auto-generated charts.

Crystal Cut considered many of these solutions and concluded that something different was needed. And although it has consistently developed digital solutions for its clients, including some of the largest domestic and multinational companies in Greece, it decided to create a paper log. It named it the “Effective Blood Pressure Log.”
Following detailed system analysis, Crystal Cut’s software designers have concluded that the problem of high or low blood pressure can be better understood if it is depicted on paper. The way someone writes on paper cannot be imported into a digital machine. Their letters can vary in many dimensions, even in color, depending on their condition. Moreover, notes can be kept for anything, even cryptographic ones, everywhere and in any way on paper. These factors, and many more, provide the log-keeper with a far better picture of their history than a digital app. And they need it because patients can help themselves even more effectively than their physicians.
For example, the number of times they had sex, when, and how it was, can all affect their blood pressure. Only the patient can make such correlations. There are myriad such factors, all of which are particular for each person. Observing their history can enable them to make deductions and maybe discuss some of them with their doctor. Digital applications simply cannot convey such a clear picture. That is why many people (and, significantly, those who are best educated) are still using paper calendars.
Still, physicians and patients alike need the convenience of a chart to depict a blood pressure–time series. The Effective Blood Pressure Log has this feature – blood pressure–time monthly tables – which its users can fill out. They also need to be able to compare data. That’s why each page of the log can hold up to 31 measurements: one month. And every double-page spread holds the morning measurements on the left-hand side and the evening’s on the right.

There is much more inside the log, which anyone can view and download from www.effectivebloodpressurelog.com absolutely free. It is also freely available to print and use. If a user prefers it as a ready paper logbook, they can buy it from Amazon for $7.50. It contains 128 pages, which can hold five years of data. Its ISBN is the 978-6188553811.

High blood pressure, or hypertension as it is known, has been characterized officially as the “silent killer”. The Effective Blood Pressure Log could prove a precious defense.