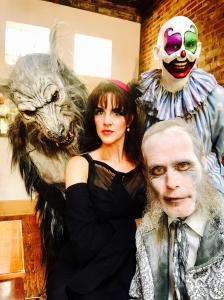 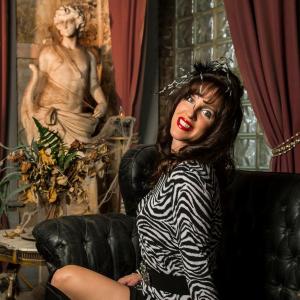 Queen of Haunts Ready to Welcome Visitors for the 2021 Opening

From my early childhood sleeping in coffins at Edge of Hell – to now part of the team who has seen decades of transformation, getting screams and laughter never gets old.”
— Amber Arnett-Bequeaith, aka Queen of Haunts

KANSAS CITY, MO, UNITED STATES, September 15, 2021 /EINPresswire.com/ — After 47 years, the thrill of haunt season is still present for the operators of Edge of Hell and Beast Haunted Houses. They’ve worked all year to ready these attractions for opening, including updating features, re-arranging sets, and caring for the various live animals in the attractions. This Friday, September 17, the haunted attractions will open in Kansas City’s West Bottoms to carry on the tradition.

These haunt-industry professionals have set the bar and raised the bar, with Edge of Hell, the oldest, continuously operating haunted house in the U.S. and nationally-rated Beast Haunted House. They’ve hired over 200 staff to help these esteemed haunts live up to their reputation not to disappoint as they scare the bejesus out of people each weekend through November 17.

Haunt employees joining the Edge of Hell and the Beast teams often report scaring was good for their soul and left them ‘frightfully’ free because they no longer had to scream at the television. The scare cast at the Edge of Hell and Beast entertain fans from all over the region and nation for visitors to enjoy the adrenaline rush, screams, and laughter.

“The haunted houses continue to evolve whether it’s the attraction, the protocols, or technologies, we have an industry that thrusts itself to innovate,” said Amber Arnett-Bequeaith, also known as the Queen of Haunts. “From my early childhood sleeping in coffins at Edge of Hell – to now part of the team who has seen decades of transformation, getting screams and laughter never gets old.”

The haunts executed safety protocols that were successful in 2020, including requiring all visitors and employees to wear masks, submit to temperature checks, and use the provided hand sanitizer before entry. These procedures will remain in effect for 2021.

“We recommend people who want more intense scares visit early in the season and go through earlier in the evening when there are fewer people. Outside there is always lots of fun watching people reacting to street characters and enjoying the late-night foods available. Later in the season, we get bigger crowds, and the experience is a sort of bonding amongst those in the house facing fear together,” Arnett-Bequeaith added.

About Full Moon Productions
Full Moon Productions owns and operates world-class haunted house attractions since 1975 and has prioritized helping children and pet charities in the community, including the anti-bullying program “Don’t Be A Monster.” The Edge of Hell, Beast, and Macabre Cinema Haunted Houses are located in the West Bottoms Historic District off the 12th Street Bridge near Downtown Kansas City.