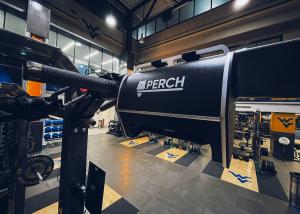 The West Virginia Mountaineers are among the latest users training smarter with Perch’s weight room technology.

BOSTON, MASSACHUSETTS, UNITED STATES, September 22, 2021 /EINPresswire.com/ — While there can only be one champion crowned at the end of the season, a growing number of NFL and NCAAF teams this offseason began using an MIT-developed, Al-backed weight training platform to at least gain an edge on the competition.

Called Perch, the device uses a combination of 3D cameras and machine learning to monitor movements during exercise and enhance an athlete’s motivation, safety and performance in the weight room – something that co-founder Jacob Rothman says fitness technology has to date failed to address.

“Instead of a wearable device tracking steps, calories, heart rate, you name it — Perch provides a similar experience but geared toward sets, reps, power output,” says Rothman, noting the technology is building on the consumer fitness trend of self-generated data and bringing the concept of velocity-based training to the weight room. “We’re providing that same type of experience that everybody gets when they go out for a run or they’re running on a treadmill, but when you step into the weight room.”

So how exactly does it work?

Hardly a foot long and a few inches wide, Perch has three components: a 3D camera that fastens to any weight rack with a couple of Velcro straps, a battery pack and a tablet. The latter two adhere via a magnet. An athlete walks up, logs in on the tablet and starts lifting. While he lifts, the 3D camera tracks his movements and instantaneously displays important metrics such as sets, reps, velocity, and power output on the tablet. Players and coaches can then access the data via a web and mobile application after the workout. The data is also stored and saved in Perch’s web application to best monitor how to approach future workouts.

“When you get into the weight room, there is no similar experience,” adds Rothman. “All of that information is being missed. So what we sought to do was go in and provide more data, more feedback, enable a coach to get more detailed in terms of the prescription in the weight room.”

According to Saints Head Strength and Conditioning Coach Dan Dalrymple, the early returns have been very encouraging for the Saints staff. The players have taken to the user-friendly interface, they’ve found new ways to compete (I lifted 400 pounds! Well, I lifted 400 pounds faster!) and, most importantly, their training is fine tuned.

“Now, on a daily basis without having to do much, we can see not only how much weight is on the bar or how many reps the player did, but how quickly and efficiently the bar moved,” he says. “And we can look at that and there’s formulas we can use that tell us, ‘Is that an appropriate load?’”

Perch’s ease-of-install – roughly three minutes – has also allowed for the device’s adoption well beyond football. Other users include the Orlando Magic (NBA), Philadelphia Phillies (MLB), Dallas Stars (NHL), Columbus Crew (MLS) and Kentucky Men’s Basketball (NCAA), among many others. Devices have also been installed at various military bases, fitness and performance facilities, and a growing number of high schools and home gyms across the country.