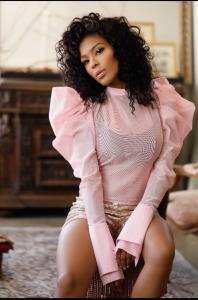 LOS ANGELES, CA, USA, December 23, 2020 /EINPresswire.com/ — Moniece Slaughter has taken on the naysayers in her latest single “ILL”. The single, which debuts exclusively on her Weiv Channel, will be released on December 24th (Christmas Eve) along with a music video. “ILL” is Moniece’s response to being negatively portrayed for years on television and not getting the chance to showcase her music despite being on television for that reason. Moniece is reminding the world of who she is: creative, vibrant, and honest.

When asked what inspired her to release the song Moniece shared, “I’m really passionate about this record because I am done with the show & the show never highlighted my music. I did not feel respected and the audience did not get the chance to respect me for my music, I was told that I would be on the show for my music but sadly it was the total opposite. It has been amazing to see such a great response for just a teaser alone. The response proves focusing on my music was the right choice. I am here to claim my throne as the R&B queen I am.”

Recently, Moniece ended her tenure with VH1’s “Love and Hip Hop” to focus on motherhood and things that bring joy to her life. Since leaving the show, Moniece has used her platform to spread positivity and connect with her fans on a more personal level. To keep up with Moniece, follow her on Instagram.

Moniece Slaughter is a singer, songwriter, and television reality star. She became popular on the hit VH1 reality show ‘Love & Hip Hop: Hollywood’, which chronicles the life of hip-hop celebrities living in and around LA. Moniece is also known for her songwriting skills. She has a career in singing as well and is famous for singing the title track for ‘America’s Next Top Model’. A social media celebrity, Moniece has over one million followers on Instagram and more than 130,000 followers on Twitter.