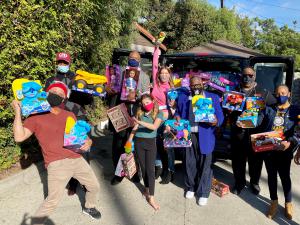 Emmy Award-winning actress Michelle Stafford, with the support of the Young and the Restless cast and production crew, bought out a local Big Lots toy section to ensure hundreds of children will be receiving gifts this holiday season. 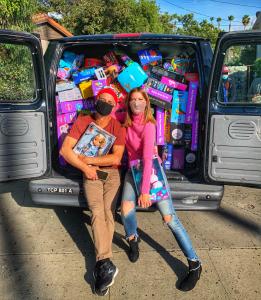 Young and the Restless stars Michelle Stafford and Christian LeBlanc 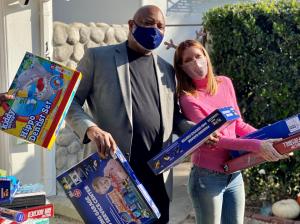 INGLEWOOD, CALIFORNIA, UNITED STATES, December 15, 2020 /EINPresswire.com/ — Emmy Award-winning actress Michelle Stafford, with the support of the Young and the Restless cast and production crew, bought out a local Big Lots toy section to ensure hundreds of children will be receiving gifts this holiday season. The NAACP Inglewood/South Bay is working with community organizations to distribute the gifts, generously donated by the cast and crew of the Young and the Restless.

Due to Covid and the increased economic duress facing many families this holiday season, Stafford, a single mother of two, said as the holiday’s approached, “I kept thinking about families that may not be able to afford gifts for their children, and how devastating this would be to any parent.” So, she reached out to Reverend Fred Shaw, President of the NAACP Inglewood/South Bay. “I’ve known Reverend Shaw for years. He works with many organizations in the Los Angeles area, particularly those relating to children,” said Stafford. “So, I called him and said, ‘My friends at Y&R and I would like to help purchase toys for families that are having a tough time, would this be helpful to any of the organizations you work with?’ He immediately said yes, so we were thrilled to be able to help!”

Reverend Shaw, who has been given national awards for his work with children, including the Congressional Black Caucus “Men Who Care” award, was grateful to have received the call, “Realizing this year may be a very trying time for families and their children, Michelle and her co-stars wanted to ensure that parents could see smiles on their children’s faces this Christmas,” Shaw stated. “That means a lot. And I applaud the entire cast and production crew of the Young and the Restless for their generosity. This is truly a blessing. The Young and the Restless is a hugely popular show in our community and to have them reach out to us in the holiday spirit is a testament to people who care. The collaborative effort of the many individuals who contributed to this is a great benefit to these children. God Bless them.”

After speaking with Reverend Shaw, Stafford shared news of the collaboration with the NAACP with her Young and the Restless costars and production crew, who immediately joined in to help, both with donations and a group field trip to a local Big Lots. Co-star Christian LeBlanc posted pics of the outing on his Instagram, thanking his fellow cast members, production crew and co-star Michelle Stafford for coming up with the idea, stating they wanted to “help make Christmas a little more special for kids in Los Angeles.” LeBlanc said that after the Y&R crew bought out the toy section in Big Lots, customers who found out why the cast were there, and what they were doing with the gifts, “rushed out and donated gifts they themselves purchased!” Leblanc added, “God bless everyone!”

Rev Shaw reached out to community organizations and Clergy that provide services to those in need, such as the National Action Network, the Salvation Army, International Brotherhood of Electrical Workers, Service Employee International Union Local 1000 and Angeles Mesa Presbyterian Church who will all be receiving donated toys to distribute to hundreds of children.

Transporting the truckloads of toys that have been stored at Michelle Stafford’s house will be Music Express Limousine and Messenger Service, who are donating transportation for free in support of a good cause—joining the cast and crew of the Young and the Restless and organizer Michelle Stafford in helping make Christmas a little brighter for children.