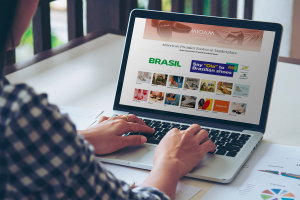 The return on investment (ROI) at Micam Americas stood at over 7.337% for Brazilian exhibitors.

NOVO HAMBURGO, RS, BRAZIL, April 6, 2021 /EINPresswire.com/ — The 22 Brazilian footwear brands that participated in the digital fair Micam Americas from January 19 to March 16 reported deals in the order of USD 1.1 million, combining sales closed during the event and those that began to be negotiated during the participation. In total, more than 50 thousand pairs were sold during the event, which was supported by the Brazilian Footwear, footwear exports promotion program developed by the Brazilian Footwear Industries Association (Abicalçados) in partnership with the Brazilian Trade and Investment Promotion Agency (Apex-Brasil).

Abicalçados’ Trade Promotion analyst, Ruisa Scheffel, highlights that digital events have been increasingly capturing the attention of Brazilian exhibitors, not only due to the restriction imposed on in-person actions but also due to the results they produce. “The return on investment (ROI) at Micam Americas stood at over 7.337%,” the analyst celebrates.

According to Scheffel, brands and buyers have been evolving in the digital format to conduct business. Most companies say that they will continue betting on digital events after the pandemic, even with the resumption of in-person gatherings. “Digital platforms make it possible to prospect for new leads and to go into new businesses at a time when in-person trade fairs are limited,” Scheffel adds.

Satisfied exhibitors
One of the brands that have been participating in the digital events of the Brazilian Footwear is Pegada. The company’s international business manager, Alex Engelmann, says that, during Micam Americas, the brand was sought after by buyers and distributors from the United States, Romania, and Australia. “The participation was very relevant, especially given the support of the Brazilian Footwear, which has been providing all the necessary assistance to boost business in the digital actions,” he assesses, highlighting that this business model has been making the brand more well-known in the international market.

Ferrucci’s financial director, Camila Ferrucci, points out that the trade show created opportunities for new customers and business deals, especially with buyers from the United States. “The event was very important for the company, beyond the initial expectation,” she celebrates.

Participating in a fully digital action in the international market for the first time, Schutz considers the debut a moment of learning. “We established very important contacts with buyers, especially from the United States. The results were beyond expectation,” says the brand’s trader, Lisiele Silva, who intends to continue investing in digital actions, in addition to the traditional in-person events.

About Apex-Brasil:
The Brazilian Trade and Investment Promotion Agency (Apex-Brasil) works to promote Brazilian products and services abroad and attract foreign investments to strategic sectors of the Brazilian economy. To achieve these objectives, Apex-Brasil carries out diversified trade promotion actions aimed at promoting exports and enhancing the value of Brazilian products and services abroad, such as prospective and trade missions, business rounds, support for the participation of Brazilian companies in major international fairs, visits by foreign buyers and opinion makers to learn about the Brazilian production structure, among other business platforms that also aim to strengthen the Brazil brand. Get to know: www.apexbrasil.com.br.