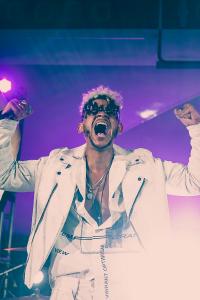 Marshall Hugh of the Marshall Law Band performing at Seattle’s Museum of Flight on March 29, 2021. 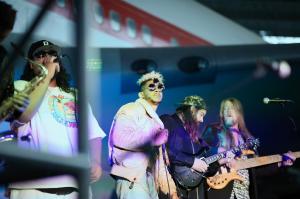 Weapons of war were being deployed in the streets of Seattle, but we played on. We didn’t stop, we haven’t stopped, and we aren’t going to stop either.”
— Marshall Hugh

Marshall Hugh of the Marshall Law Band would have been only the second hip-hop artist to win a Pulitzer Prize, after Kendrick Lamar’s 2018 win for DAMN. While Pulitzer does not list published demographics of winners, in 2016 CJR did extensive research and found that of 943 named individual winners, only 30 (just 3%) have been Black.

“It’s an incredible honor to have been considered in the first place and to be recognized for the album that was brought to life in a time and place where police brutality and anti-blackness is rampant,” said Marshall Hugh, the band’s frontman. “Weapons of war were being deployed in the streets of Seattle, but we played on. We didn’t stop, we haven’t stopped, and we aren’t going to stop either.”

The album up for award, 12th & Pine, was created on the ground in the streets of Seattle during active protest and civil unrest. 12th & Pine echoes the voices of those across the country, and around the world. The Pulitzer committee continues to show partiality towards classical music and theatre productions. 12th & Pine is a visceral experience, in the true spirit of Joseph Pulitzer’s philosophy of journalism and reporting at the grassroots level for ordinary people. Although 12th & Pine is extraordinary, it was created with the people, for the people.

While disappointed, Marshall Law Band will continue to advocate for the Black community and the appreciation of Black excellence in the fight to end racism.