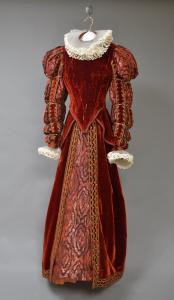 Costume worn by Betty Davis as Queen Elizabeth in the movie The Private lIves of Elizabeth & Essex 1939 and designed by Orry-Kelly. The decorative fabric was removed that was attached to the dress from another movie and was restored to look original again. 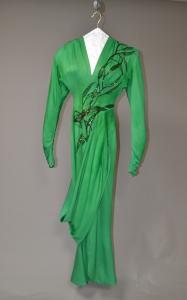 Emerald Green evening gown worn by Liza Minelli and designed by Theodora Van Runkie for the film New York, New York 1977.The bugle bead design was restored, stains were removed and the color restored due to fading. 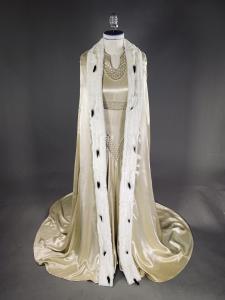 Hundreds of Seed Pearls were replaced, the fur was added back to the collar as in the original design of Loretta Young’s Cream Silk gown and cape studded with seed pearls at the bodice and kirtle worn for the film The Crusades 1935 and designed by Travis Benton

Tipton started collecting 40+ years ago, and his interests began with movie posters in the 1980s, which segued into Props and Costumes. Collecting vintage Hollywood costumes is Tipton’s hobby and has enabled him to meet fascinating people. For example, Debbie Reynolds was a great contact and friend whose personal efforts to save costumes from early Hollywood history were appreciated. Tipton considers who wore it and the actor’s name recognition, how important the movie was at the peak of the actor’s career, and is the piece visually arresting when deciding on a new acquisition. Collecting is about films and not fashion.

Tipton believes a quote best answers the vintage value to the fashion world from Marie-Jeanne Rose Bertin’s dressmaker to Marie Antoinette. “Bertin is said to have remarked to Marie Antionette in 1785 when presenting her with a remodeled dress, “Il n’y a de nouveau que ce qui est oublié” (“There is nothing new except what has been forgotten.”)

Margaret’s replaced Hundreds of Seed Pearls and added the fur back to the collar as in the original design of Loretta Young’s Cream Silk medieval gown and cape studded with seed pearls at the bodice and kirtle worn for the film The Crusades. Travis Benton designed Lorretta Young’s costume in 1935 for the movie The Crusades. Benton is considered one of the most important Hollywood costume designers of the golden age. Glamour, subtle elegance, and exquisite fabrics endeared Travis Banton to the most celebrated Hollywood royalty and one of his era’s most sought-after costume designers.

The restoration and preservation of an elaborate costume weighing approx. sixty pounds and worn by Betty Davis as Queen Elizabeth in the film The Private Lives of Elizabeth and Essex 1939, designed by Orry-Kelly. The restoration team removed the decorative fur attached to the dress from another movie and was restored to look original again. In addition, the velvet was restored in some areas damaged by time.
﻿
Orry-Kelly was an American-Australian Hollywood costume designer and Australia’s most prolific Oscar winner who won three academy awards for best costume design. Orry-Kelly was known for his ability to “design for distraction” to compensate for different figure shapes. In addition to designing, Kelly wrote a column, “Hollywood Fashion Parade.” For the International News Service. Kelly’s memoirs, entitled Women I’ve Undressed, were published in 2015. The film The Private Lives of Elizabeth and Essex is considered a grand historical epic.

”I have been working with Margaret’s for a few years and found them online, we met, and I showed them my collections and have been continually impressed by their cleaning, restoration, and preservation services”. Norman Tipton.

Margaret’s has the proven expertise, heightened sensitivity, and justifiable confidence to tackle these most delicate and critical projects and has been trusted with numerous museum collections over our decades of service.

About Margaret’s the Couture Cleaner
Margaret’s is the Nation’s most prominent retailer service provider. We are the cleaning and repair service choice for many fine retailers and department stores, including Neiman Marcus, Louis Vuitton, Herm s, CHANEL, Valentino, GUCCI, GIORGIO ARMANI, Burberry, Loro Piana, St. John, and over 300 retailers throughout Southern California, Las Vegas and nationwide through CleanbyMail.

Margaret’s the Couture Cleaner offers various services that you will not find at your ordinary dry cleaner. All services are performed in their award-winning processing facility in San Diego. Four generations of experience and custom processes provide us with the expertise needed to handle the most delicate couture gowns, costumes, vintage, new garments, handbags and leathers, shoes, and nearly every textile application.

Through Margaret’s RETAILER ALLIANCE cleaning services, their expertise is used by over 300 retailers and designers across the country to maintain their stock merchandise and assist with customer service issues. In addition, numerous dry cleaners nationwide also use the expert team at Margaret’s to help solve processing errors and entrust us to perform their most demanding cleaning challenges.