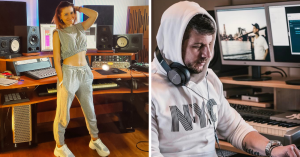 Audie B and DJ Bander collaborate on a new track.

DJ Bander will support Audie B with beat development and arrangement on her new track with rapper The Game and is planning to work with her for the long term.

[2020] has been an eye-opener to many things, being able to focus on perfecting my craft, developing my brand, and last but definitely not least collaborations with international artists.”
— Audie B

LOS ANGELES, CALIFORNIA, UNITED STATES , December 16, 2020 /EINPresswire.com/ — If there has ever been a year for musicians to bunker down and focus on their craft, it’s 2020. For the majority of the year, people worldwide have been forced into quarantine due to the coronavirus pandemic. As a result, music artists are re-examining their career trajectories and exploring all of their options.

For Paris-Based French-Australian musician Audie B, it has definitely been that type of year. Already with multiple singles under her belt and a successful dance career to boot, Audie B planned on 2020 to be a year full of tours and exciting new travel opportunities. Instead, it’s left her locked in her Paris apartment, focusing on her flow, delivery, and writing – planning her next move.

Of course, there are worse places to be locked up—but for Audie B, who possesses a natural streak of curiosity, it hasn’t been easy.

“I had plans for the U.S this year; I didn’t expect 2020 to turn out like this, no one did, to be honest, but it has been an eye-opener to many things, being able to focus on perfecting my craft, developing my brand, and last but definitely not least collaborations with international artists.”

And of these collaborations has been with none other than DJ Bander, a producer and successful artist in his own right that is based next to an entirely different ocean and on an entirely different continent. Bander owns and operates Bander Productions, a full-service production and media company out of Los Angeles, CA, that supports up and coming artists. When he was introduced to Audie B by her publicist, Nadya Rousseau, he was struck by her playful but intense sound.

“I knew right away Audie B had a natural stage presence; she was just missing the full package of management and development to take her to the next level. Also, my current style of 808 productions is a perfect fit for Audie B’s fresh urban sound.”

The introduction was on substantial grounds—Audie B had just gotten prominent West Coast rapper, The Game, to agree to collaborate with her for a new track. Rousseau, knowing Bander had immense skill and background in hip hop, forged the introduction.

Now, DJ Bander is supporting Audie B with beat development and arrangement on her new track with The Game and is planning to work with her for the long term helping her get to the top of her craft. Together, he and Rousseau of Alter New Media will also support her brand’s growth globally. To keep up with Audie B and her collaboration with DJ Bander and others, follow her on Instagram.

ABOUT AUDIE B & DJ BANDER:

Globe trotter Audie B is a French-Australian hip-hop and rap artist based in Paris, France. As a professional dancer, her artistry is inspired by the creativity and dedication found within her studies of ballet and contemporary jazz. Audie B writes lyrics aimed at inspiring and resonating with her audience, even freestyling and encouraging her fans to interact with her over her Instagram and Youtube channel. DJ Bander is an investor, artist, top 100 charting producer, and entrepreneur who manages an established production house with Sony distribution. He is the founder and CEO of Bander Productions, a full service media production and marketing company servicing music artists worldwide supporting rising artists like Audie B.