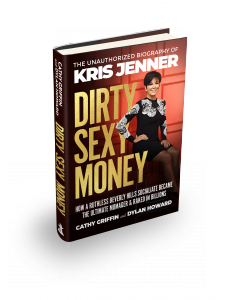 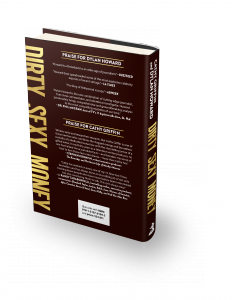 A TRUE STORY OF AMBITION, WEALTH, BETRAYAL AND HOW A RUTHLESS BEVERLY HILLS SOCIALITE BECAME THE ULTIMATE MOMAGER AND RAKED IN BILLIONS

The picture painted is one of a woman who was savvy, steely, ambitious, deliberate who has played the long game in a town where fifteen minutes of fame is all too fleeting.”
— Cathy Griffin

NEW YORK, NY, UNITED STATES, December 29, 2020 /EINPresswire.com/ — The highly anticipated unauthorized biography of Kris Jenner will be published on Tuesday, January 5, 2021, by Skyhorse Publishing. Titled Dirty Sexy Money, the book pairs award-winning investigative journalists Cathy Griffin and Dylan Howard to provide the most thorough account of how Kris, a Beverly Hills socialite with no formal education, built herself a global empire and became one of Hollywood’s most powerful women. Dirty Sexy Money: The Unauthorized Biography of Kris Jenner will be released in the U.S. and Canada simultaneously in hardcover, audio, and electronic formats.

Ms. Griffin and Mr. Howard began working on the book years before the Kardashians ended their tenure with 20-season run with E! and inked a new mega-multi-million-dollar deal with streaming network, Hulu. The reporters investigated everything from Kris’ childhood in California to her time as a close confidante to O.J. Simpson and his murdered wife, Nicole Brown Simpson. They also uncovered revelations about Kris’ extra-marital affair, her strained marriage to ex-husband, Robert, and her reaction to the surprising transition of husband Bruce to Caitlyn.

The pair completed their 312-page book earlier this year. During their years of meticulous research and reporting, they conducted scores of interviews with sources, many of whom have never before spoken for publication about Ms. Jenner.

“The picture painted is one of a woman who was savvy, steely, ambitious, deliberate who has played the long game in a town where fifteen minutes of fame is all too fleeting,” said Ms. Griffin, whose Dirty Sexy Money: The Unauthorized Biography of Kris Jenner is her second book following the 1996 publication of Crowning Glory: Reflections Of Hollywood’s Favorite Confidant (General Publishing Group, July 1 1996), the memoir of legendary hairdresser to the stars, Sydney Guilaroff, the head hairdresser at MGM studios during Hollywood’s Golden Era.

For over three decades, expert New York Times bestselling biographers of literary narrative nonfiction have relied on Ms. Griffin’s unique background as a journalist and licensed private detective. She has contributed research, interviews, and storytelling strategies for 24 book titles, 17 of which are national bestsellers, written by internationally acclaimed biographers. They include J. Randy Taraborrelli, whose Jackie, Janet and Lee: The Secret Lives of Janet Auchincloss & Her Daughters Jacqueline Kennedy Onassis & Lee Radziwill (St. Martin’s Press, January 2018) was an instant New York Times bestseller.

Said Ms. Griffin: “With the help of key people who spoke publicly for the first time and never before told stories, Dirty Sexy Money: The Unauthorized Biography of Kris Jenner provides an unflinching look at Kris’s triumphs and losses, her crises and celebrations, her famous friendships and family conflicts.”

This in-depth biography unravels the family’s meteoric rise to fame. Together, Ms. Griffin and Mr. Howard delve behind the headlines and social media hype to tell the true story of Kris’s life — — rather than the rosy picture of overnight success she likes to paint.

• How Kris really sold her long-running television reality series, exclusively from the lips of the man who packaged the deal
• Finally, the truth about just how important to Kim Kardashian-West’s sex tape was to be jump-starting her career
• The planned launch of a cable TV partnership between Kris and the then Bruce Jenner with alleged killer O.J. Simpson that was aborted when O.J.’s wife, Nicole Brown Simpson was murdered
• The truth about her current relationship with a much younger man, Corey Gamble
• How Kris is addicted to risk and attention, and the tragedies that shaped her into the woman she is today
• The shocking diaries accusing Kris of parental abuse
• How the matriarch drove a wedge between Bruce and his family
• How Kris controlled her daughters sex lives
• The remarkable true story of how Keeping Up with The Kardashians came to be — and why Bruce and Kourtney initially had reservations from the beginning
• The making of a billion-dollar, global mega-brand revealed

“You may love her, you may hate her, but you can’t ignore this media star and businesswoman,” added Ms. Griffin. “Readers will come away with a greater appreciation of who Kris really is beyond her television persona and a fuller understanding of her important place in reality television and Hollywood cultural history as a pioneer.”

“The result is a dramatic narrative account of Kris’s real story as you’ve never heard it before . . . in all its dirty, sexy glory,” said Mr. Howard.

Mr. Howard is one of America’s best storytellers. Author, filmmaker, podcast creator, television executive producer, he is an investigator with an unprecedented ability to uncover the facts, no matter what the scandalous scenario. Of Howard, The Los Angeles Times said he has “spearheaded some of the most explosive celebrity exposés of recent vintage” and “transformed America’s tabloid culture.” Howard’s sense for news saw him rise to become the undisputed most powerful entertainment editor in the world: as Chief Content Officer of the publisher that owns Us Weekly, In Touch, OK!, Life & Style, Closer, Star, The National Enquirer, RadarOnlinie.com and dozens of other digital and print brands. He currently lives in New York City.

For fifteen years, Ms. Griffin was the West Coast Editor for syndicated entertainment columnist Liz Smith and wrote her own bylined column Society Bytes that appeared for many years in Los Angeles Confidential and Beverly Hills 213 magazines. Ms. Griffin was the Los Angeles Bureau Chief for the Australian publication New Idea for almost a decade and was Editor-at-Large of Life & Style magazine. Her TV producing credits include an Elizabeth Taylor documentary for the A&E Network’s Biography series. She currently lives in Los Angeles.

Dirty Sexy Money: The Unauthorized Biography of Kris Jenner will be published under the Front Page Detectives imprint of Skyhorse Publishing.