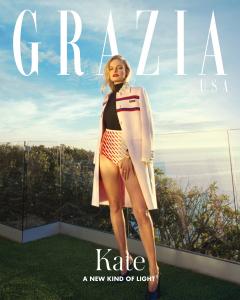 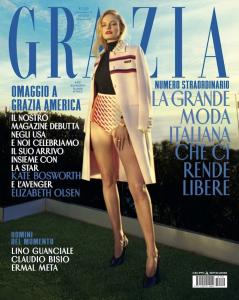 In a world-first, Kate Bosworth appears on the cover of Grazia USA and Grazia Italy. The cover reads: “Homage to Grazia USA. Our magazine debuts in the USA and we’re celebrating with the star Kate Bosworth and the Avenger Elizabeth Olsen.”

Like everyone, I feel the emotional rollercoaster from day to day … we couldn’t sit around and watch a year pass by and press pause.”
— Kate Bosworth

NEW YORK, NY, UNITED STATES, February 19, 2021 /EINPresswire.com/ — The U.S. edition of Mondadori Group’s fabled brand Grazia announced the last of its three digital covers featuring the quintessential Grazia “it girl” Kate Bosworth. The release of the US digital cover coincided with the reveal of the Italian Grazia issue also featuring Bosworth on its cover.

The Hollywood actress, producer, and KIND.est founder was photographed by LA-based photographer and director, Sasha Samsonova.

Grazia USA Editor-in-Chief David Thielebeule noted: “Grazia USA celebrates the women changing it all, and there is no better testament to that ethos than Kate Bosworth. Already a major star in her own right, she founded KIND.EST during the pandemic to bring more joy, honesty, and kindness into the world at a time when it’s so sorely needed. Photographed by Sasha Samsonova and styled by Petra Flannery, Kate’s cover is a tribute to bold, powerful and kind women changing the world.”

When COVID-19 put a pause on the routine activities of daily life, Bosworth noted: “Like everyone, I feel the emotional rollercoaster from day to day.” Ultimately, she continued, “We couldn’t sit around and watch a year pass by and press pause.” Bosworth instead used the time to focus on building Kind.EST – a true labor of love.

“I think a lot of people see public figures and they think there must be a team of people behind the curtain, but every word is written by me, every photo is taken from me… It really is self-expression,” she said. In a sense, it’s the expression that’s the point. Asked about her future plans for the site, she admitted with a laugh, “I don’t have a two-year plan.”

Authenticity and the importance of mentorship are a consistent thread between all of Bosworth’s diverse projects. Take for example, Make Pictures Productions, founded with her husband, Michael Polish. Bosworth explained: “Imagine the number of scripts and projects that never came to fruition because we don’t have the gender equality or the diversity that we need to be able to tell the stories that are going to connect in a real way with our world.” Expanding on this idea she said, “I purposefully wanted to be involved in every stage, so I could say be in these rooms and be more involved in the decision making of the stories that we see and consume.” The duo’s upcoming show Bring on the Dancing Horses is the production company’s first major release.

Bosworth praised the importance of mentorship, explaining: “Because I’m an only child… there has always been this kind of familiarity with loneliness… I was very shy and a little bit embarrassed to be honest and say, ‘I need help. I don’t know what I’m doing’… Now, being on the other side of that, it’s like, no, you have to ask for help.” Further to this idea, she said that “It takes a hell of a lot of courage to be vulnerable. One cannot exist without the other, and I love that. Every time I think, ‘Man, I’m about to write an article, or play a role, or produce a project where I feel really vulnerable,’ I always think the possibilities on the other side of that are so amazing.”

A leader and icon for so many other women, Bosworth revealed that she’s inspired by so many new talents around her as well. Reflecting on Amanda Gorman, the Youth Poet-Laureate who most recently spoke at the Presidential Inauguration and Super Bowl, Bosworth said: “When I watched [Amanda Gorman], as everyone else did, just move us all and unite us all, I was bursting with pride. She’s a deeply knowledgeable human being, but the breadth and the depth of her soul goes far behind intellect… She’s here in the world to communicate to us and to help us communicate to ourselves and to communicate to others.” Bosworth met Gorman years ago, and featured her on KIND.EST this February.

Bosworth’s cover debut caps off an impressive period of growth for Grazia USA. Having just launched three months ago, graziamagazine.com already has amassed 2.2 million users for the month of January alone, establishing itself as the fastest growing publisher in the fashion category with almost 50% of the audience women aged 18-34. The brand’s social reach, defined as the total number of people to reach across all of Grazia USA’s various social media networks, was 3.1 million in the month of January.

As part of its roll-out strategy, Grazia USA will also publish a 400+ page quarterly print edition, beginning in September 2021.

ABOUT GRAZIA:
Grazia is Italy’s fashion bible, published by the Mondadori Group. For more than 80 years, Grazia has remained in step with changing tastes season after season, style after style. At the top end of quality and design, Grazia is the most accomplished ambassador of the “Made in Italy” brand and is a preferred advertising vehicle for designer, fashion, and beauty companies. Thanks to its experience, excellence and brand value, Grazia is the first Italian weekly magazine to extend its successful formula abroad, creating the most dynamic network on the market with 21 editions worldwide in 23 countries.

ABOUT PANTHEON MEDIA GROUP, LLC:
Pantheon Media Group (PMG) is an independent next-generation media company that brings one of the most prestigious European fashion magazines to the biggest fashion market in the world. PMG is the exclusive publisher of Grazia USA, the latest franchise of the iconic fashion bible,
first launched in Italy in 1938 by the Mondadori Group. Also uniquely focused on beauty, culture, society, status, celebrity, and luxury, Grazia USA publishes digitally first and later in print, with the release of the first of its quarterly 400-page magazines in 2021. Grazia USA does more than just inform and inspire an educated audience of influential readers: It is unlike anything the fashion industry in the United States has ever seen. We do not serve readers, we serve users. PMG is a 360-degree media business that is poised for the future, broadening storytelling into virtual and augmented reality, video, television, audio, e-commerce, live events, branded content, innovative advertising solutions and beyond. PMG is headquartered in New York City.