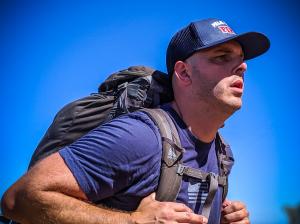 Marine, Firefighter, Sony recording artist and First Responder/Veteran suicide advocate will hike in honor of retired firefighter that lost his life to suicide.

There is a special bond and connection between those who have faced the tragic loss of a loved one to suicide. It is my privilege to help honor his father in this way.”
— John Preston

The event was created by Barney Smith in honor of his father, Edward Smith III, who served as an Alameda Firefighter for 30 years. Barney lost his father to suicide on January 4, 2019. He planned this event in honor and memory of his dad and all first responders and veterans that struggle with mental health.

Barney is unable to participate in the hike, so John will be taking his place.

Due to COVID-19 restrictions, the 50K hike will include only a small group of friends that will hike for 24 hours on January 3-4, 2021, from Livermore to Alameda, California. The 24-hour period represents the shift of a firefighter. Others may participate in the event through a virtual platform where they are encouraged to complete the same distance on their own over 22 days and log it online.

The route will cover Edward’s daily commute from his house to the fire station where he worked. You can view the course online.

“Dad was a big supporter of whatever I did,” said Barney Smith. “I love him and miss him daily. I am doing this for suicide awareness for people who think there is no help.”

Registration is only $22, and all participants will receive either a commemorative medal or a challenge coin.

All proceeds will be given to the American Foundation for Suicide Prevention. You can find out more information, register, or donate on the event website.

About 22 and You
22 and You was founded by Marine, Firefighter, and Sony recording artist John Preston as a movement to save the lives of first responders and veterans suffering from post-traumatic stress (PTS) after losing his brother to suicide in 2016. John started the movement by embarking on a 630-mile hike from Palo Alto to San Diego that caught the attention of many individuals, including first responders and veterans to walk alongside John. Encouraged by John’s perseverance, these fellow hikers shared their own personal battles or stories of loss as they descended the California coast together. John brought along a film crew also composed of veterans and first responders that not only covered the hike but helped him push on to the finish line on the USS Midway.

A documentary film about the hike, John’s story of loss, and the struggles of mental health will be released in 2021. Find out more and watch the documentary trailer on the 22 and You website.

22 And You Documentary Trailer