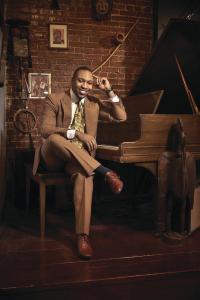 WASHINGTON, DISTRICT OF COLUMBIA, UNITED STATES, June 4, 2021 /EINPresswire.com/ — Jazz vocalist and pianist Aaron Myers announces two upcoming events that will celebrate the highly successful release of his fourth full-length studio project, The Pride Album, which debuted on Friday, April 30th. The album received critical acclaim, being reviewed by Downbeat Magazine and The Dallas Morning News among others, and Myers is excited to share the project with his fans in these two intimate events.

The first event will be the in-person premiere of the “The Pride Video Album,” Aaron’s first venture with Mecca Filmworks that documents the album’s intricate recording process in its entirety. The screening will take place at The Eaton Hotel in Washington, DC, on Saturday, June 19th at 4 pm EST, and will be followed by a panel discussion with the Center for Black Equity that revolves around the yearly observance of the Juneteenth holiday and the intersection of blackness with Pride. The visuals originally debuted during the DC Jazz Festival’s official International Jazz Day Celebration, but this screening will serve as the official public premiere. Immediately following the viewing and panel, guests are invited to the roof of the hotel for cocktails. Attendees should register in advance here, capacity in the theatre is limited.

The first official live performance of The Pride Album will take place on Monday, June 21st at 8pm and will be the first in-person concert presented by Blues Alley since the start of the pandemic. Aaron will be joined by an all-star cast of local musicians including bassist Kris Funn, drummer Dana Hawkins, saxophonist Herb Scott, and guitarist Steve Arnold – all of whom appear on the project. This historic performance will allow Aaron’s fans to experience the album in a unique and intimate fashion, and it is sure to be an event that jazz fans across the Greater Washington area should plan to attend. Tickets are available for $20 in advance with $25 the day of and can be purchased here.

“Blues Alley is pleased to announce its triumphant return to weekly jazz entertainment at the National Press Club in downtown Washington, DC,” said owner Harry Schnipper. “[The club’s] regular weekly ‘Monday Night Jazz’ series will expand to limited, in-person performances beginning with renowned vocalist Aaron Myers on June 21st and the release of his recent “Pride” recording. This will be both a live and virtual performance with additional details at www.BluesAlley.com.”

Myers is looking forward to the privilege of being one of the first jazz artists to help bring live music back to the city he calls home. For any interview requests or event, press credential inquiries*, please contact Matt at mgmt@aaron2.me.

Listen to The Pride Album and get familiar with the new sound of Jazz. The album is available to stream or purchase on Bandcamp, Spotify, Apple Music, Tidal, and YouTube Music among others.

*A limited number of press credentials are available for each event. Please reach out to the contact listed above if you would like to cover the event in-person.*