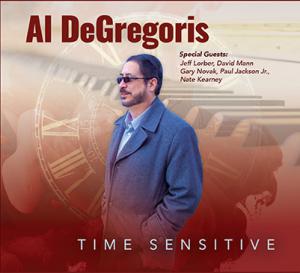 Contemporary Jazz At Its Finest In “Sandbox” By Al DeGregoris

GARDEN CITY, NEW YORK, UNITED STATES, February 22, 2021 /EINPresswire.com/ — Appreciating jazz doesn’t take a trained ear for music or a special inclination to saxophones. All it takes is a dedicated artist and a great arrangement. Thankfully, Al DeGregoris is there with a steady supply of contemporary jazz melodies.

As an artist, Al DeGregoris has known to bide his time in the world of contemporary urban jazz. It takes a lot for an indie artist to be included and appreciated in the community. In the meantime, the artist is using everything in his repertoire to engage his audience.Al DeGregoris knows his way around music. After starting his career in 2008, the artist has now released 5 albums.

Al DeGregoris’ most recent album called ‘Time Sensitive,’ is his first release since 2016 and showcases the dynamic chemistry he’s created with fellow keyboardist and fusion legend, Jeff Lorber. The two began collaborating and Lorber began producing tracks for DeGregoris, on All in Good Time (2014), but this is the first time every track on a DeGregoris collection was co-written and produced by Lorber. Lorber has clearly imparted his passion for old school keyboard sounds to DeGregoris, who jams brilliantly on them before exploring the deeper, jazzier soul of the track with a dancing and dazzling, highly improvisational acoustic piano section.

Al DeGregoris’ decision to work purely with Lorber for production and songwriting for this project has resulted in an album that grooves and flows like a duets project equally showcasing their individual and collective talents. With David Mann providing simmering and often explosive horn arrangements for texture and mood-setting – a much more inspired foundational concept than a single saxophone voice and solos – DeGregoris and Lorber create the musical equivalent to sparkling, witty and insightful conversations. Their complementary repartee emerges via melodic leads, harmonies and solos on synths generating a retro sound, Fender Rhodes and, most glorious and organic of all, acoustic piano. May their empowering symbiosis lead to a splendid future for contemporary jazz in coming years.

His lively single, “Sandbox,” from ‘Time Sensitive’ showcases spirited synth melodies backed by gritty funk and a few moments of soaring, silky sweetness to help push the listener into the present and out from dwelling in the past.

‘Time Sensitive’ and DeGregoris’ other albums are available to listen to on all major streaming platforms. For more about Al DeGregoris and his work, visit his official website – https://adgjazz.com/

Al DeGregoris has been in the music industry for a long time. The multi-talented composer, pianist and keyboardist launched his recording career in 2008 with ‘Three Before Midnight,’ followed up with ‘Times and Travels’ (2012). On his release in 2014, he reminded his fans that everything promising will be fulfilled ‘All in Good Time,’ and on his fourth release in 2016, followed up with ‘Time and a Half.’ The album ‘All in Good Time,’ featuring key contributions from contemporary jazz greats Chuck Loeb, Jimmy Haslip and Eric Marienthal featured the single “Sunnyside”. This track earned DeGregoris his highest Billboard airplay chart position, rising to #28 on the Billboard Smooth Jazz National Airplay chart.

Since the release of All in Good Time, and driven by the popularity of its single “Sunnyside”, and the four top 20 hits from Time and a Half, DeGregoris has had some exciting new opportunities to open for some of the genre’s most elite artists. He opened for Jazz Funk Soul (the trio of Lorber, Everette Harp and Chuck Loeb), at the Madison Theatre in NY, and later opened there for Loeb and Eric Marienthal; he has also opened at the Garden City Hotel for Chieli Minucci and Special EFX. Al appeared at the iconic Stephen Talkhouse, joined by Ron Jenkins, and will appear at the Chapin Rainbow Stage in Huntington NY, joined by Joel Rosenblatt. He was set to appear at the Berks Jazz Festival at Gerald Veasley’s Midnight Jam, but the show was postponed due to the Covid-19 pandemic. The keyboardist has a long history of live performances playing everything from classic rock to standards dating back to his days as a music major at Hofstra University and later when he was enrolled in law school. In 2001, he and a local guitarist formed the smooth jazz group Deja Blue and performed for several years at numerous venues and festivals in NYC and on Long Island. These included BB King’s Blues Club and Grille, The Peconic Bay Winery, Ospry’s Dominion Winery, Town of North Hempstead Concert Under the Stars Series and the Nassau County Noontime Concert Series.