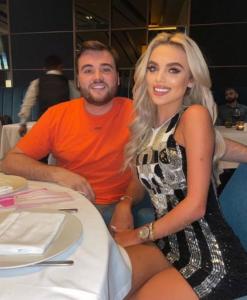 LOS ANGELES, CA, UNITED STATES, June 2, 2021 /EINPresswire.com/ — As currently reported in international media, Bayley Jacob, an Instagram influencer with over 80,000 followers, is subject to an international criminal investigation. Jacob, 22, from London, became the girlfriend of Tex Jacks, 26, from Essex, when they both met in Dubai.

Jacob boasted of their lavish lifestyle on Instagram, showing off expensive jewelry, designer clothes, and luxury holidays twice to the Maldives. Neither Jacks nor Jacob has any employment history or legitimate businesses in Dubai or elsewhere.

Furthermore, Jacob has a well-known history of prostitution. She used Instagram under various names (BayleyBlue, BayleyBrignano, BayleyIsla, BayleighIsla) to generate at 90,000-person following from which she could platform her prostitution. Working with notorious madams in Dubai, and maintaining a “Seeking Arrangement” account, Jacob initially funded her own lifestyle in Dubai from prostitution. These are matters which have been put in evidence in English Court proceedings against Jacob, which she has not contested in those proceedings.

Serious criminal activities were financing this excess, which attracted the inevitable attention of law enforcement authorities in Dubai.
Yet, despite being under police surveillance, they were allowed to leave Dubai on 29 March 2021, and travel to Bali. Incredibly, Jacob has continued posting Instagram pictures and stories, showing off their lifestyle on the island.

Jacks left his Mercedes in the parking lot. As pictured on her Instagram, Jacob took her collection of a dozen designer bags with her. Jacks and Jacob walked out of Dubai airport. The couple has now returned to London.

In a reported phone conversation, Jacks has said that he knew of the raid, and is never coming back to Dubai. This would also account for why AED 200,000 cash was left at the apartment, together with Jacks’ rental car.

An intensive investigation was conducted of Jacks, Jacob, and other British expats committing a catalog of criminal offenses in Dubai. The investigation was committed by the Dubai Police, together with the Drug Enforcement Department, the Dubai Financial Services Authority, and the General Directorate of Residency and Foreign Affairs.

There is a mutual extradition treaty between the UAE and the UK. The Dubai police can have Jacks and Jacob arrested in London with one phone call, and extradited to stand trial in Dubai for their vast offences. That call has still not been made.