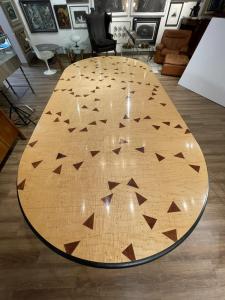 Dining table designed by Wendell Castle (American, 1932-2018), inlaid with purpleheart triangles and inlaid dots spelling “The Check’s in the Mail”, the table’s title ($70,110). 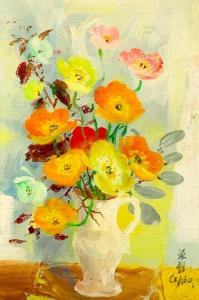 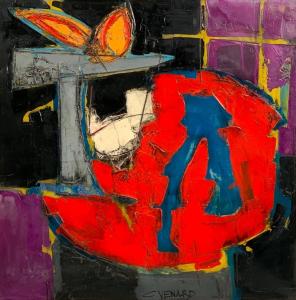 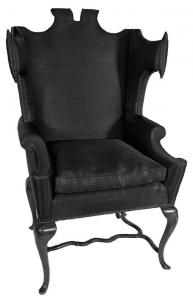 The auction was packed with 424 lots gathered from regional estates and longtime collectors, including selections from the late Cleveland concert promoter Mike Belkin and his wife Annie.”
— Cynthia Maciejewski

The auction was packed with 424 lots gathered from regional estates and longtime collectors, including selections from the late Cleveland concert promoter Mike Belkin and his wife Annie. Items covered a wide range of mediums and categories, to include paintings, sculpture, works on paper, furniture, art glass, ceramics, enamel work and jewelry, plus many undiscovered finds.

The Wendell Castle dining table sailed past its pre-sale estimate of $30,000-$50,000 to earn top lot honors. It featured an oval top in holly veneer, inlaid with purpleheart triangles and inlaid dots spelling “The Check’s in the Mail” (the table’s title). It had a leather covered edge with a purpleheart substructure supporting six gold plated brass rings.

Mr. Castle created a similar table for his own residence titled Never Complain, Never Explain, in 1981. It’s pictured on the cover of the book Furniture by Wendell Castle (Hudson Hills Press, NY, 1989). The Check’s in the Mail (1988) was 120 inches long and 59 inches wide and signed and dated. It came from the Mike and Annie Belkin collection.

The oil on canvas still-life by Lê Phổ, titled Fleurs (Flowers), was artist signed lower right with a chop mark and measured 13 inches by 9 inches (sight, less frame). It blew past its $6,000-$9,000 estimate. Lê Phổ was born in Hanoi, but he studied at the École des Beaux-Arts in Paris (where he later taught) and called Paris his home from 1937 until his death.

The oil on canvas Still Life with Sculpture on Table by Claude Venard, boldly executed with heavy impasto, was signed and nicely housed in a 28 inch by 28 inch frame. Claude Venard was a French post-Cubist and still-life painter. Known for working in a distinct angular style, he accentuated the chromatic qualities of his palette through thickly applied impasto paint.

Modern furniture pieces were led by a mid-century (circa 1950-1960) wingback chair by Arturo Pani (Mexican, 1915-1981), upholstered in horsehair fabric with a split crest rail and extreme scroll wings, raised on cabriole legs ($9,225); and a circa 1960s Odyssey coffee table by the American design team of Philip Laverne (1908-1988) and Kelvin Laverne (b. 1936). The etched, patinated, polychromed bronze and pewter coffee table went to a determined bidder for $7,380.

A standing sculpture of a nude woman by Marc Sijan (American, b. 1946), titled Standing Barefoot and made from polyester resin and oil paint with Leotard, signed and dated 1990, numbered 2/5, 68 inches tall including pedestal base, achieved $7,995. Also, a bronze statue of a nude woman depicted from the waist up, hands outstretched and holding a turquoise bracelet, by R. C. Gorman (American, 1932-2005), titled Cocheta (1980), on a wood base, rose to $2,829.

Several diminutive boxes by American craftsman Kenneth Francis Bates (1904-1994) came up for bid, including an enamel over gold leaf box titled Peacock Box (1930), signed and dated to the base, the four-sided tapering form colorfully decorated with peacock feathers ($3,998); and Salome’s Comforter (1977), an enamel box with cover, artist signed and dated to the base, the circular form in translucent enamel on 24 karat gold paillons; it found a new owner for $3,690.

A tall, rounded cylindrical form stoneware vessel by the noted Cleveland School artist Claude Conover (1907-1994), 22 inches tall, signed and titled to the base, knocked down for $5,228. Also, jewelry pieces from Bernd Munsteiner featured a fancy cut tourmaline on a 14kt textured yellow gold hinged bangle bracelet with bezel set accent diamond, marked 14kt on the clasp, with the bracelet made by another maker, garnered $3,198.

Internet bidding was facilitated by Liveauctioneers.com, Invaluable.com and Bidsquare.com. Phone and absentee bids were also accepted. Neue Auctions’ next big event will be a Summer Estates auction slated for Saturday, July 17th, at 3 pm Eastern time. In addition to Internet and phone/absentee bidding, there may be live gallery bidding, if the corona virus is under control.

Neue Auctions continues the long-standing history and tradition of art collecting in Cleveland by bringing fine works of art to the market for sale, encouraging the current and next generation of collectors. Neue Auctions is accepting consignments for future sales. For purchases or inquiries about consigning, please call 216-245-6707; or send an email to cynthia@neueauctions.com.

Neue Auctions invites everyone to be added to its email list to receive notifications and information regarding all current and future sales. For info, visit www.neueauctions.com.