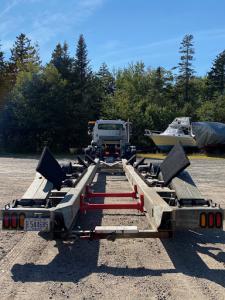 HOSTAR’s experienced mechanics and welders are dedicated craftsmen who take pride in knowing that each and every HOSTAR hydraulic boat trailer is built for consistent reliability.

The company was founded in 1985 by Dwight and Patricia Stimson, and originally was located in Plympton, Massachusetts. The first HOSTAR hydraulic trailer was exhibited and sold at the 1986 Miami International Boat Show. Dwight Stimson III joined the HOSTAR management team in 1996 and continues to lead the company as its current President/CEO. Success led HOSTAR to relocate to a modern 26,000-square-foot industrial building in Wareham, Massachusetts, where the company still is headquartered today. This move enabled HOSTAR to increase production capacity to meet increased customer demand. Early road trailers were built with spring or rocking beam suspension, while yard trailers featured outboard hydraulic suspension. Later innovations, many customer-driven, led to a variety of improvements, such as independent air ride suspension, aft-facing pivoting rear hydraulic arms, reversible rear arms, rolling dolly forward cross beam, hydraulic disc brakes, and more. In 2008, when the recreational marine market had slowed due to the recession, HOSTAR designed and manufactured two 25-ton self-propelled trailers for the U.S. Coast Guard, 10 custom hydraulic road trailers for the U.S. Navy, and several trailers for Homeland Security.

As the economy began to improve around 2010, orders started coming in from all over the world. A 35-ton, all-wheel steering, self-propelled yard trailer was built for Independent Boat Yard, St. Thomas, USVI. “Our yard is long, narrow, and odd shaped, and the HOSTAR trailer, with all wheel steering and four-wheel drive, fit our requirements exactly. Despite the current economy, the trailer will have paid for itself by the end of 2011,” said Jim Kellogg, owner, at the time.

In 2013, HOSTAR shipped a custom 45- ton tri-use yard trailer to a resort marina and boatyard in Guatemala. This first HOSTAR yard trailer built specifically to handle catamarans, powerboats and sailboats was followed by a 30-ton model for a new boatyard in Vava’u, Kingdom of Tonga. Regulator Marine, Inc. contracted HOSTAR to build a custom production-line system. The system consisted of custom expandable Titan dollies and a 15-ton yard trailer used specifically for manufacturing the new Regulator 41.

As the popularity of catamarans grew, so did the need for hydraulic trailers to handle them. In 2015, a lead generated from the Pacific Marine Expo led to the sale of a 30- ton yard trailer built to handle catamaranstyle boats for Juneau Whale Watch in Alaska. Most recently, HOSTAR completed and delivered a 45-ton self-propelled boat mover to Bridgeport Boatworks in Bridgeport, Connecticut, and a 60-ton selfpropelled boat mover for Pilots Point Marina, also in Connecticut.

Moving forward, HOSTAR plans to continue supplying the U.S. and global marine markets with high-quality, costsaving innovative designs utilizing the most technologically advanced products to enhance the productivity of boat building, boat transport, and boat yard operations. The company also is expanding its global presence by promoting its products through social media, target-specific boat and trade shows, and internet presence. Its products now are sold in more than a dozen countries.