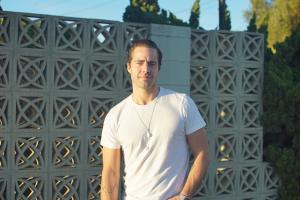 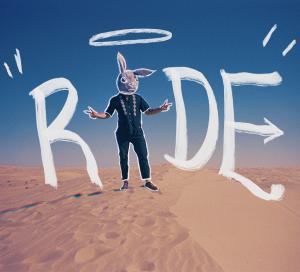 Swirls, twirls, and girls (but with rabbit mascot heads) submerge Dom into this dreamscape.

Carrying out the legacy of the London street soul sound, Dom Whalley transfers that style alongside his eccentric glitter and grit into his new single “Ride.” The LA-based multi instrumentalist cut his teeth as a founding member of Jungle, prioritizing music first and everything else second. With nearly 4 million monthly Spotify listeners, Jungle are world builders and creative directors. Whalley (percussion, synthesizers, backing vocals) has seen the stages of Bonnaroo, Boston Calling, and Trópico.

Now, he shifts his musical coordinates with his own composition of life and love. His debut single “Ride” was written as an expression of wanting to ride off to an adventure but also how cravings fester in times when you have nowhere to ride off to… especially as the song was written in the middle of the pandemic. Hence the video is all about chasing a rabbit but never quite getting there – lost in a limbo. The track was produced between London and LA as Dom left his hometown to start his solo career and film scoring endeavours.

California’s deserts are boundless beauty-filled lands filled with grandeur and awe. Endless potential, nomadic wanderers, and a color palette reflecting all of the earth’s hues are just some traits that define the desert ruins. It makes for a perfect home, visit, and backdrop for a music video. Dom doesn’t waste a second to show off the uniquely California terrain in “Ride.” It’s a breezy pop track with groovy undertones, the muted but bursting keyboard adds funk and fun while the clapping keeps it on track. Alone, the song loops you into a fever dream, but the music video confirms your esoteric suspicions.

Swirls, twirls, and girls (but with rabbit mascot heads) submerge Dom into this dreamscape. A swing set in the middle of a lake during the sunset seems like an air castle to the girl floating above the waterline (played by his wife MacKenzie). Perhaps it’s the post-apocalyptic land surrounding the Salton Sea, or the dystopian desert of Slab City but the lines between reality and fantasy blur with beauty.

Is he lost or just a casual roamer? Maybe, there is no destination in mind. Let down your hair, grab your rabbit heads, and come get your feet wet with Dom Whalley in the idyllic “Ride.”