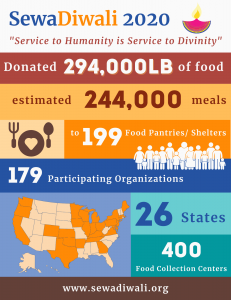 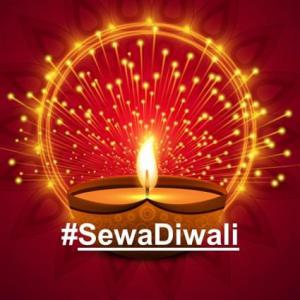 Awesome TV is proud to support SewaDiwali, as they selflessly feed fellow Americans in time of need…

“There was such a need for food in support and we have such driving Indian community donated generously and made a difference in thousands of people’s lives and 2020 is tough year for everybody”.”
— The Mayor of Jersey City, New Jersey, Steven Fulop

NEW YORK, NEW YORK, USA, December 22, 2020 /EINPresswire.com/ — New Jersey, December 22nd – During the season of giving and on the occasion of the Hindu festival of Diwali, nearly 179 organizations and numerous individuals came together to collect food for food pantries across the country. Over 2 months, 294,000 lb. of food was collected across 26 states and 225 townships in USA, and donated to 199 pantries, soup kitchens, and shelters under the “SewaDiwali” initiative.

This food drive was a collective effort of cultural and religious communities, yoga institutions, and numerous other organizations rooted in the Dharmic value of Sewa (meaning selfless service). During this drive, hundreds of people made their homes “collection centers” for their neighbors to contribute. People were encouraged to donate canned goods and non-perishable items, which could be donated to food pantries or homeless shelters.

Jennifer Apostol, Department Head, MCFOODS, NJ shared her words. “With 9,000 lb. of food donated, the food pantries know they can have shelves stocked and ready for visiting families. Some families are still paying bills- you have helped many families have one less thing to worry about”.

“This was a two-month program, with the plan to collect food and give it to the local food pantries,” said Venkat Gade, President Chinmaya Mission in Connecticut. “We wanted to be an integral part of the Township and the community helping residents.”

Diwali, the festival of lights, is celebrated by nearly all cultures and traditions that originated in India, including Hindus, Sikhs, Buddhists, and Jains. The initiative began in New Jersey in 2018, when 25+ organizations collected 18,000 pounds of food during the festival of Diwali with the goal of supporting the local community. This project expanded to 11 states in 2019 and collected over 55,000 pounds of food items across 40+ townships throughout the Northeast Region.

This initiative energized numerous young kids and teenagers to step up in creative ways to collect food in their neighborhoods. A 5th grader Krish, from Katy, Texas even started a video campaign to appeal to his friends to participate in this drive! Upon asking why he chose to do this, he commented “Life is not about just ourselves, it’s about all of us together and what we can do to support each other.”

“During any calamity, we are all reminded to do all that we can to care for our neighbors in need,” said Venugopal Mallesara, a volunteer of Hindu Swayamsevak Sangh USA (HSS) from California, “It is the responsibility of everyone to make sure we do our best to lend a helping hand to those who have been hit the hardest by the COVID-19 pandemic, by collecting and donating food for local food pantries and neighborhoods.”

Recognizing this service initiative in various local communities, The Governor of Indiana, Mayor of Woodbridge, Monroe, North Brunswick of NJ, Mayor of Livermore, San Ramon of CA, and around 25+ township officials commended the immense efforts of Hindu communities.

The Governor of Indiana, Eric Holcomb, shared the quotes of Martin Luther King Jr. who said, “Life’s most persistent and urgent question is ‘what are you doing for others?’ And in times when many people are going through hardships, physically, financially and spiritually, your actions shine as a beacon of hope.”

Awesome TV is proud to support SewaDiwali, as they selflessly supported fellow Americans in time of need… Ritesh (Awesome TV)

About SewaDiwali
“SewaDiwali strives to make a difference in the lives of those suffering from food insecurity. Driven by the values of Dharma and selfless service, this noble act of giving back is a collective initiative of organizations and individuals from Hindu, Buddhist, Sikh, and Jain Communities. This initiative is nationally coordinated by Hindu Swayamsevak Sangh USA, a non-profit, voluntary service organization.”

About Awesome TV
Awesome TV aspires to create and distribute content that entertains, inspires and informs. As pioneers in the South Asian streaming industry in North America, Awesome TV has connected Bollywood, Hollywood and original entertainment with its audience across the globe. Check out the newly updated Awesome TV Website and Apps, which are available now in the Apple App Store and Google Play Store.

The Mayor of Woodbridge, New Jersey, John McCormac, attended one of the drive-by contactless food drives. After the food drive he commented that “This drive is extremely helpful for our township families, children and seniors in need and also helps us to restock our pantries.”

The Mayor of Jersey City, New Jersey, Steven Fulop, attended one of the food delivery event and he commented that “There was such a need for food in support and we have such driving Indian community donated generously and made a difference in thousands of people’s lives and 2020 is tough year for everybody and we are fortunate to have people like this pulling together to make the city a better place”.