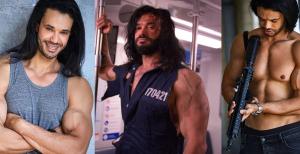 International French actor Hafedh Dakhlaoui, loves Sydney so much he encourages movie directors all over the world to consider Sydney the new Hollywood.

SYDNEY, NEWS SOUTH WALES, AUSTRALIA, June 8, 2021 /EINPresswire.com/ — International French actor Hafedh Dakhlaoui, born in Tunisia and now based in Sydney, what a combination of global experience crammed into an action packed , gun smoking award winning power performer. At the age of 15 Dakhlaoui participated in ‘Nadia and Sarra’, a French-Tunisian film directed by Moufida Tlatli. In 2014, Dakhlaoui appeared in Black Rose, a Russian-American action film as max says move to Australia the new Hollywood.

Dakhlaoui played the role of Cole’s Bodyguard in 2014’s ‘Showdown in Manila’ ‘ filmed in the Philippines. In 2015, Dakhlaoui appeared in ‘Maximum Impact’ directed by Andrzej Bartkowiak then in 2019, he appeared in Wild League where he played Alexander. By 2020 Dakhlaoui starred in Octopus Pot with Mykel Shannon Jenkins, played the lead role in the movie ‘They called me Keith’ And the role of Walker in ‘The Spy Who Never Dies’ an entirely produced Australian Film produced by Writer , Producer and Director Cory Pearson where he worked alongside Teressa Liane known for her acting in the ‘Vampire Diaries’ , ‘Roman Empire’ , ‘Badlands’ and the Australian Iconic TV Series ‘Neighbours’.

Since 2020 Dakhlaoui has presented himself in more than a few Award winning productions such as the web series Flawsome ‘ Directed by Australian ‘Claudia Pickering’. Co-Producing ‘They Called Me Keith’ gave Dakhlaoui an opportunity to again bring his international experience to Australia creating more work for talented Sydney Actors. A few weeks ago I was lucky enough to spend time on set with Lead Actor Hafedh Dakhlaoui in his latest thriller movie ‘Sayonne’ set in Sydney and directed by Australia’s very own Summer Nicks.

Recently approached by the directors of ‘Trimester’ to work in Los Angeles on a Thriller movie alongside three amazing American actors including Shayla Hudson Riggle and Narlyia Sterling, Dakhlaoui convinced the crew to come to Australia to produce it in Sydney where filming will start soon. Dakhlaoui keeps proving again and again that International actors can make Australia home in a lucrative industry bouncing high post covid with Australia’s changing landscape and Covid free life the perfect destination for any international Hollywood Film Director. Dakhlaoui lives in his humble Surry Hills apartment creating global opportunities for global actors so keep an eye out for this Hollywood sensation who now calls ‘Australia Home’.