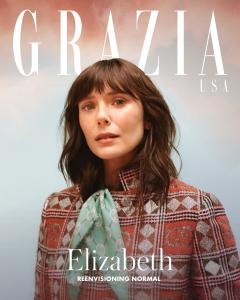 ELIZABETH OLSEN’S 20/21 VISION: The Marvel star takes Grazia USA inside her transformation to a new kind of hero.

‘The Avenger’ explains why she quit social media

I see [Wanda] as a victim of extreme trauma, who does not understand how to process it. She has been a human experiment.”
— Elizabeth Olsen

The WandaVision star was photographed by London-based photographer Ekua King and styled and interviewed by Grazia USA Contributing Editor and former Vogue Fashion News Editor Emma Elwick-Bates, also of London. The shoot occurred on the set of the forthcoming and highly anticipated Doctor Strange.

On the launch of the second major visual expression of Grazia USA, Editor-in-Chief David Thielebeule said: “Elizabeth Olsen represents so much of what makes American women great: Talented, thoughtful about her career choices, stylish, and warm, she is grounded and relatable as much as she is an aspirational figure.”

In striking contrast to many young actresses today, Olsen also has no official social media accounts. Said Thielebeule: “Grazia USA is a digital-first publication, and we’re inspired by how Olsen has created boundaries for online content that work for her. That line is something our users are always trying to navigate.”

Indeed, Olsen said, “It has to be a personal decision, right? So, my opinion has nothing to do with what anyone else does or doesn’t do with it.”

Olsen left social media in September 2020 after trolls mounted a bullying campaign against her following Black Panther star Chadwick Boseman’s death. Careful not to mention Boseman or the incident specifically, Olsen is clear about her reasons for unplugging.

“Lots of horrible things happen all the time,” she said.” Or, lots of great things happen all the time. Whether it’s something terrifying, like a natural disaster or a school shooting or a death, there are so many things that happen, and I love processing information. I love reading articles. I love listening to podcasts. I love communicating about things that are happening in the world to people around me. And what I don’t love is that my brain organization was saying, ‘Should I post about this?’ That seemed very unhealthy …”

“To then contribute to these platitudes that I don’t really love, you have to subscribe to two different ways of thinking,” she said. “So, I didn’t like that, and there was a lot of it that was just bothering me for my own sake of what value systems I have.”

Olsen is just as intentional when it comes to her career, which has hit a new height with WandaVision, a parable for modern times. Olsen revealed her own take on the notoriously multilayered show: “I see [Wanda] as a victim of extreme trauma, who does not understand how to process it. She has been a human experiment.”

Olsen grew up in a social experiment of her own, having had the ultra-famous “Olsen Twins,” Mary Kate and Ashley as her older sisters. Olsen admitted she was very conscious of the weight of the Olsen name when she first started auditioning and said: “Nepotism is a thing and I’m very aware of it. And of course, I’ve always wanted to do it alone.” The results speak for themselves.

Having just launched three months ago, graziamagazine.com already has amassed 2.2 million users for the month of January alone, establishing itself as the fastest growing publisher in the fashion category, with almost 50% of the audience women aged 18-34. The brand’s social reach, defined as the total number of people to reach across all of Grazia USA’s various social media networks, was 3.1 million in the month of January.

As part of its roll-out strategy, Grazia USA will also publish a 400+ page quarterly print edition, beginning in September 2021.

ABOUT GRAZIA:
Grazia is Italy’s fashion bible, published by the Mondadori Group. For more than 80 years, Grazia has remained in step with changing tastes season after season, style after style. At the top end of quality and design, Grazia is the most accomplished ambassador of the “Made in Italy” brand and is a preferred advertising vehicle for designer, fashion, and beauty companies. Thanks to its experience, excellence and brand value, Grazia is the first Italian weekly magazine to extend its successful formula abroad, creating the most dynamic network on the market with 21 editions worldwide in 23 countries.

ABOUT PANTHEON MEDIA GROUP, LLC:
Pantheon Media Group (PMG) is an independent next-generation media company that brings one of the most prestigious European fashion magazines to the biggest fashion market in the world. PMG is the exclusive publisher of Grazia USA, the latest franchise of the iconic fashion bible,
first launched in Italy in 1938 by the Mondadori Group. Also uniquely focused on beauty, culture, society, status, celebrity, and luxury, Grazia USA publishes digitally first and later in print, with the release of the first of its quarterly 400-page magazines in 2021. Grazia USA does more than just inform and inspire an educated audience of influential readers: It is unlike anything the fashion industry in the United States has ever seen. We do not serve readers, we serve users. PMG is a 360-degree media business that is poised for the future, broadening storytelling into virtual and augmented reality, video, television, audio, e-commerce, live events, branded content, innovative advertising solutions and beyond. PMG is headquartered in New York City.