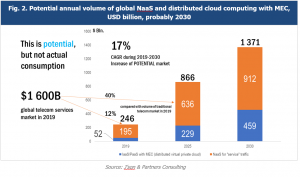 The global private LTE market will be decreasing, while private 5G deployments will become the part of logically isolated end-to-end network slices for hybrid clouds deployment and network as a Service development.

J’son & Partners Consulting, one of the leading consulting companies in Technology, Media, Telecommunications, has evaluated the global private LTE/5G market.

In case of full-scale digitalization, the IoT/M2M traffic in WANs will make no less than 90% of the total volume of traffic by 2025. The volume of NaaS consumption may exceed USD 900 billion by 2030.”
— Alexander Gerasimov

In 2020 the annual worldwide spending on private LTE/5G had reached $1 billion with over 10% YoY growth, which is only about 2% of total expenditures in the cellular infrastructure sector despite quickly growing demand from all major industries. Relatively low costs are primarily due to unacceptably high costs of deployment of private cellular network, even for large enterprises, and low utilization rate of private networking capacity.

However, the market is to accelerate in 2022 with an increase in standalone private 5G network deployments. In a base scenario, worldwide spending on private cellular deployments will grow with a 23% CAGR (2020-2025), and in 2025 it will reach USD 2.8 billion (Fig 1). The market will be fueled by the demand from industrial customers that need tailored QoS, high reliability, and security not available in existing 4G or “5G-ready” networks. Other significant trends include the network as a service model and such innovations as network slicing, MEC, etc.

The global private LTE market will be decreasing, while private 5G deployments will become the part of logically isolated end-to-end network slices for hybrid clouds deployment and network as a Service development.

“In case of a successful full-scale digitalization of the global economy key verticals (industries), the IoT/M2M traffic in WANs, , i.e. traffic between IoT/M2M devices and OT-applications backend and service traffic, will make no less than 90% of the total volume of traffic in WANs by 2025, while less than 10% of traffic will be generated by users’ devices and users’ applications backend. According to this scenario, the volume of NaaS consumption may exceed USD 900 billion by 2030. 95% of interviewed mobile operators consider the impact of NaaS on their revenue growth as “positive,” “great,” and even “real game-changer,” — says Alexander Gerasimov, Head of digital transformation analysis at J’son & Partners Consulting.

Important pointers of the report:

• An increased demand from industrial customers is expected as 5G and MEC technologies develop and provide a high network bandwidth and low latency and guaranteed quality, reliability, and security.

• MEC has become more relevant in the 5G system, in which the control plane and user plane are separated, and the user plane functions (UPF) are moved to the edge. MEC brings network capabilities closer to end-users and supports distributed deployment. With MEC, operators can share their network capabilities with third parties and build ecosystems around them. MEC is also essential to mission-critical and industrial 5G applications such as smart factories, ports, and hospitals.

• There is a clear synergy between 5G architecture enabling decentralized deployment and MEC enabling new services and experiences. Different orchestration scenarios are possible with MEC and 5G, the range of controlled parameters is more significant, and it is easier to configure the system.

The detailed results are represented in the full version of the report, available on the website.

J’son & Partners Consulting is one of the leading consulting companies in Technology, Media, Telecommunications, and Financial Services, with extensive experience in developing and auditing business plans, marketing, developing financial models, and in-depth research of markets in Russia and CIS countries.