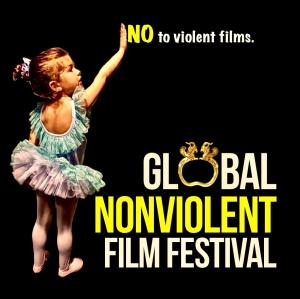 The most important and renown nonviolent film festival in the world: September 23 to October 3, 2021.

HOLLYWOOD, CA, USA, April 30, 2021 /EINPresswire.com/ — This is a milestone year for the Global Nonviolent Film Festival because it celebrates its 10th yearly edition.

When did it start and why?

The 11-day event came on the market in 2012 and it started in a resort city in Romania. In 2016 its founders, film director Bruno Pischiutta and film producer Daria Trifu, took the event online giving access to the world’s viewers to watch the high quality nonviolent films it showcases.

What type of films are shown at the Global Nonviolent Film Festival?

The public demand for nonviolent film as a genre has never been more strong. The films shown at the Global Nonviolent Film Festival are mostly independently made, and they do not contain any acts of gratuitous violence.

There are more and more people in the world who are simply tired of seeing imagined shootings, killings, and torture on the ‘big screen’. They instead look for more than just simple entertainment: they look to discover new talent, new places, different cultures, and to broaden their horizons.

What sets this Festival apart?

What sets this Festival apart are the films it shows.

There are over 15,000 film festival in the world today. It certainly isn’t easy to stand-out, but the Global Nonviolent Film Festival did just that: it stood-out of the crowd by identifying and sticking to a niche market of nonviolent films, more exactly films that do not contain gratuitous violence.

When they started, it wasn’t easy denying access to films, especially when they were very high quality and sometimes even Studio pictures, if they contained gratuitous acts of violence. Saying ‘no’ to temptation and allowing the event to grow naturally, took time but it was the right thing to do.

This terrible pandemic had an unexpected positive effect on the Festival. In a year when every other film festival in the world had to cancel or postpone their editions, the Global Nonviolent Film Festival saw a major rise in both film submissions and viewers. This happened because it was already a well established and smoothly running online event, and it required no change in its structure or setting. The organizers had simply to adapt to the three-times higher than usual amount of films and daily presentations, but there were no hiccups and everything ran surprisingly well.

Last year, the Festival screened 66 films from 30 countries. Of those, there were 11 world premieres. It was a record number.

What can we expect from this year’s edition?

Again, a lot of great nonviolent movies, documentaries, animation and music videos. These films are new, some of them have never been seen before.

Where can the Festival be watched?

The web address is www.globalnonviolentfilmfestival.com. This is where all the films, trailers and Daily Presentations are broadcast.

What happens during the 11-day event?

The schedule of the 11-day event goes as follows:

On September 23 all the films selected go live on the Festival’s online channel. This way, the public can watch any of them at the time of their choosing.

Each day, a new video presentation goes live on the channel. That’s the event’s Daily Presentation where the organizers discuss and highlight one or more of the presented films accompanied by trailer(s). This way, the public has the chance to learn more about the films and their filmmakers.

On Monday, October 4, the Awards Presentation goes live on the channel. This give the filmmakers and the public the chance to celebrate the winners.

All films remain available for viewing on the channel for an additional week following the end of the event. This gives everyone the chance to focus on the awarded ones.

The trailers of the films and the Daily Presentations remain available on the channel for one full year. This gives additional promotion to the films.

How much does it cost to watch the films?

The trailers are free to watch and so are the Daily Presentations with commentary about the participating films.

The rest of the channel works on a pay-per-view basis where one can choose and pay for the film they wish to watch individually. Prices go from $3.99 to $13.99.

There are weekly VIP passes available for the event too. They give the possibility to the people to watch any number of films they choose for a period of seven days from the date of purchase.

Globalcinema.online is a unique pay-per-view channel showcasing films & documentaries that do not contain gratuitous violence. It is available worldwide.

Every film selected at the Global Nonviolent Film Festival receives worldwide distribution with very favorable financial terms trough Globalcinema.online. This new reality makes for a win-win situation for all parties involved: the public, the filmmakers, and the Festival.

Who are the Festival’s media partners?

Daria!, the arts, entertainment and business magazine established in 2005 is the principal media partner of the Global Nonviolent Film Festival. The magazine is available online at www.dariamagazine.com. In each annual edition, there are articles about the participating films and interviews with the filmmakers.

Another media partner is IndieActivity Magazine, published by journalist Oladapo Bamidele. The magazine provides the daily coverage of the Festival followed by interviews with all the awarded filmmakers. The magazine is also available online at www.indieactivity.com.

It is notable to mention that the Global Nonviolent Film Festival is recognized by the IMDB and all the awards are listed there as well as inter-connected to the respective films’ and filmmakers’ profiles.

How can filmmakers submit their work?

They can do so via FilmFreeway at:
www.filmfreeway.com/GlobalNonviolentFilmFestival

Anyone, from filmmakers to journalists and to the general public, may contact the Global Nonviolent Film Festival at info@nonviolentfilmfestival.com. All messages receive a personalized reply and the organizers are happy to provide all the support and assistance needed.

One Promising Way of Getting Rid of Tattoo Regrets